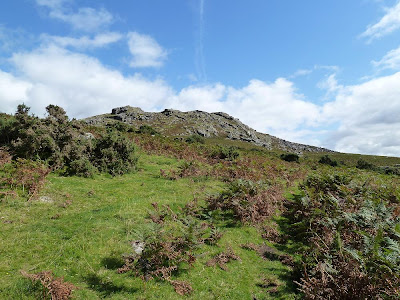 Dartmoor is an area rich in stories of the fairies, or should I say, pixies. Anna Bray's book 'A Peep at the Pixies' (1854) tells us that pixies and fairies are two distinct races:


"It is a matter of tradition that the Fairies wished very much to establish themselves in Devonshire, but the Pixies would not hear of it; and a terrible war ensued. Oberon, was, with his host defeated; and his majesty received a wound in the leg which proved incurable; none of the herbs in his dominions have hitherto had the least beneficial effects, though his principle secretary and assistant, Puck, has been in search on a healing nature ever since."

According to Popular Romances by Hunt (1865) the Pixies of Dartmoor resemble a bale or bundle of rags, and he tells a story of these rag pixies leading away a small child from his mother. Luckily he was retrieved from under a large oak-tree, said to be a favourite haunt of the local pixies. Some Dartmoor folk say that Pixies are the souls of unbaptised children.

This week just passed I was fortunate enough to spend a week in Dartmoor, and see some of the local pixie sites for myself. First on my list was Sheepstor Piskies Cave, a site so well known that it appears on modern day Ordinance Survey maps. Over the years the name of the cave seems to have varied, including Pixies Cave, Piskies Cave, Piskies Hole, and Elford's Cave. The latter name is due to a man named Elford said to have hidden in the cave from Cromwell's army. According to the Legendary Dartmoor website, there is an early mention of the cave by the Reverend Polwhele in 1797 in his 'The History of Devonshire' but I confess I have not been able to track down a copy to see for myself. The earliest mention I have seen can be found in 'A description of the part of Devonshire bordering on the Tamar and the Tavy' by Mrs Bray (1836).


"On reaching the little hamlet of Sheepstor, we were informed by the matron of it, whom from her age and appearance we denominated the septuagenarian Sibyl, that we might easily find the 'pixies' house; where we should be careful to leave a pin, or something of equal value, as an offering to these invisible beings: otherwise they would not fail to torment us in our sleep."

"With a little boy for our guide, we again ascended the mountain. Leaving our horses below, we followed our conductor over some rugged rocks, till he came to one in which was a narrow fissure. On his telliung us this was the entrance, we laughed, and said none but the pixies and himself could enter it; but, on his assuring us it was the spot, I resolved to make the attempt. With great difficulty I succeeded, and found a hollow about six feet long, four wide, and five feet high. It was formed by two rocks resting in a slanting direction against another in a perpendicular direction."

Always up for a challenge, my partner and I decided to visit the cave for ourselves, presuming of course that it is indeed the same cave known as the Piskies Cave during the 1800s, as some photos online show an entirely different cave, so there seems to be some confusion. We parked in the small parking area just off the road to the south west of the tor, and walked up the beautiful tree lined pathway. 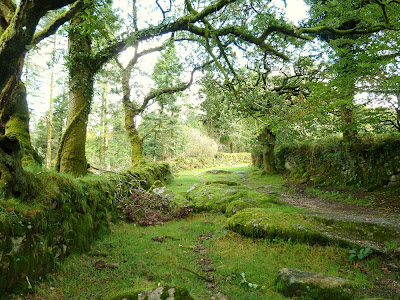 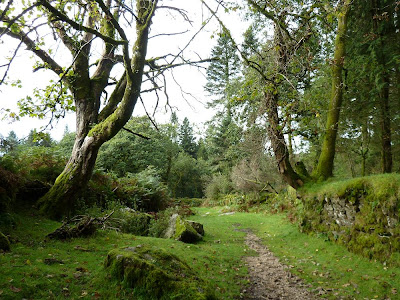 This took us to the bottom of the tor, where we picked a path up through the thick rusty bracken, stepping over the many fallen boulders that litter the sides of the hill. 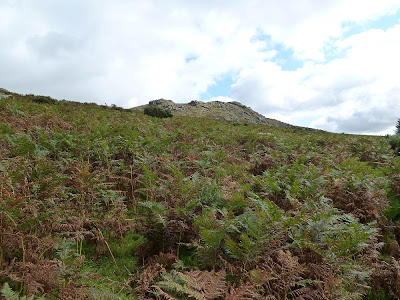 Half way up the hill we could make out in the distance the square formation of rocks that mark the entrance to the Piskies Cave. You can see it here towards the right side of the photo below. 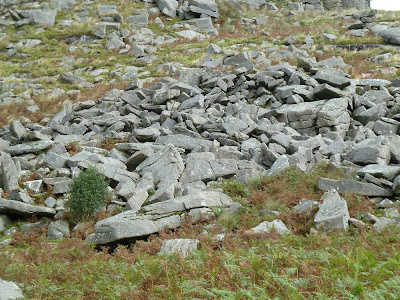 Next came the challenging part, climbing over all the fallen boulders to reach the cave itself. For me it was a challenge anyway, my partner seems to be part mountain goat and can hop from rock to rock with ease, where I have a tendancy to wobble a lot and frantically wave my arms in the air until they find a tree branch to grip on to for dear life, or a strong hand to pull me up to the next rock. And unfortunately there were very few trees on the tor! I'd like to say a big thank you to my patient and very understanding boyfriend, for his encouraging words and strong hands that kept me calm and safe climbing up to the cave. 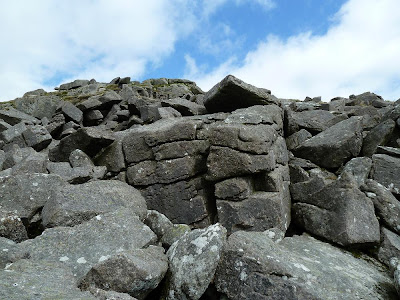 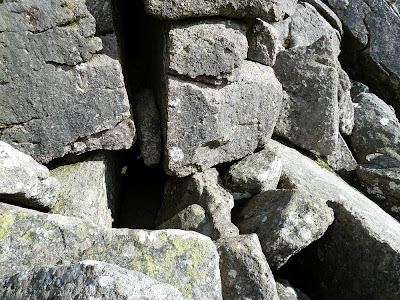 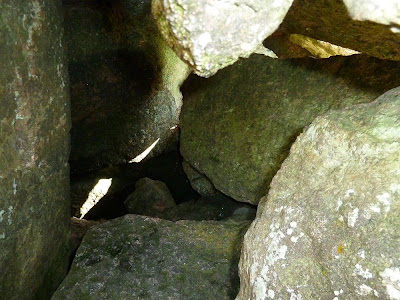 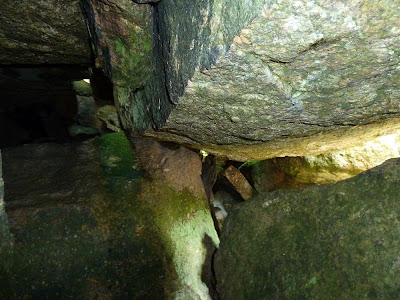 As you can see, Mrs Bray wasn't kidding when she said that only the boy guide and pixies could fit in the cave, the entrance really is tiny. According to the Dartmoor CAM website it is possible to fit into the cave if you back in on your stomach, but it's a very tight squeeze indeed and I only went as far as the cave entrance. I decided not to take any chances and as advised by the septuagenarian Sybil in Mrs Bray's tale, I left a nice shiny new pin for the Piskies.

You can see more photos of the inside of the cave, as well as very useful instructions on how to find the cave on the Dartmoor CAM website. The Legendary Dartmoor website also contains lots more interesting information about the cave and the Piskies who live there.

Very interesting - is the cave natural or do you think it's some sort of collapsed cairn? A lot of faery stories seem to be connected to the latter.

It's hard to know what the inside looks like exactly without going in there, from the entrance it looks more like a naturally formed cave from all the boulders that have fallen from the top of the tor and the ones buried in the sides of the hill, but there's no way of really knowing if the present known cave is the same one talked about a couple of hundred years ago in books. The whole tor is covered in boulders and rocks, so could easily have been antoher cave thats since been covered over by more recently fallen boulders. Sure I read somewhere that the cave entrance was originally larger but a cave in has blocked it up since. Plenty of Cairns on Dartmoor for sure, so could be one underneath there somewhere that originally started the stories off, as yup it does seem to be common that old buriel cairns get a bit of a reputation as fairy haunts! :)

Sadly the Piskies cave is not a prehistoric cairn but a natural formation. The Dartmoor cairns are usually on more prominent sites and are built with smaller rocks.
Tim Sandles
Legendary Dartmoor

Hi Tim! Pleased to meet you, your wonderful website proved very helpful in my research. Thanks for setting me straight on the Cairn suggestion. Have you ever seen any vintage photos of the cave? Would be very intrigued to see how it's changed over the years. but haven't managed to find any older photos. Also, heard of anything strange going on over at Sheepstor? Probably just foxes etc, but found remains of a dead sheep in a cave under a rock and remains of another sheep scattered on the moors. Looked very creepy indeed, lets hope the pixies haven't turned carnivore! :P

Your first bit about Oberon and the magic herb reminded me of the story of Lazy Molly from Tavistock - worth a read if you can find it online. The version I have read (in "Legends and Folklore of Devonshire by Cecily M Rutley) Has "Lazy Molly' made lame for forgetting to fead the pixies, and not getting up when they complained. She was then told about a mysterious herb on top of Dartmoor. Later her finds it and is cured (and gains more respect for the pixies) but the reader is left not knowing what the magic herb was! Pixies Cave looks pretty pokey - perhaps there is a glamor over it....

Thanks, will have to look up Lazy Molly, lovely story and sounds like a good moral tale for kids :) Very intriguing about the magic herb, wish these tales would describe it further so we could know which herb it refers to! Pixies Cave was definitely smaller looking than I expected, though other peoples photos show it as looking quite large inside and comfy enough to sit in... just first you've got to be able to squeeze through the tiny gap unfortunately! :(