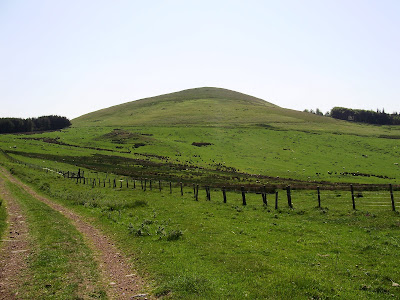 Old Fawdon Hill is said to be the royal residence of Queen Mab and her fairy troops, who spend their nights dancing and feasting on the hill. The earliest mention of Fairies at Fawdon Hill I have located so far is a poem in the Metrical Legends of Northumberland by James Service (1835), an extract of which reads:

"The sun burst on Brandon Hall,
And burnish'd the windows and silver'd the wall,
And the crimson light of morning fell,
On Fawdon Hills, where the fairies dwell.
Soft as the ray of the crescent moon,
That hallows the Fairies' festive noon, -
The noon of night, when the clear blue sky
And numberless stars linverted lie
On the breast of the scarcely-stirring stream,
When waked by the elfin-star's dawning beam,
The little green hunter winds his horn,
And dew-drops start from the snow-spangled thorn ;
For within each cup of its blossom lay,
Nestled from day-light, a minikin fay."

Myth and Magic of Northumbria, published by Sandhill Press (1992) adds the following story regarding the Fairies of Fawdon Hill:

"Some centuries ago, a farmer was riding past Fawdon Hill at midnight, when he heard beautiful music and silvery laughter. He imagined the sounds were coming from the hill itself, and as he drew closer, an open door in the hill side revealed the fairy court at a wonderful banquet. As he stood, motionless and spellbound, the fairies saw him. One of the pages approached with a drinking cup, offering it to the frightened and bewildered farmer. The man took the cup, but afraid of its contents, he threw it to the ground and rode off as fast as he could."

The exact location of the hill seems to vary in more recent literature between Old Fawdon Hill near Whittingham, and Fawdon Hill near Otterburn. I believe the location of the Fairy Hill to be the former as the poem mentions "the craggy brow of huge Dunmore" probably refering to Dunmoor Hill to the north east of Old Fawdon Hill, "the rocks which Linhope leaps in pride" refering to Linhope Spout also to the north west, "high cairn-crested Hedgley's side" refering nearby Hedgley, and finally "Breamish bursts his foaming way" refering of course to the River Breamish.

On our visit to Fawdon Hill we didn't find any fairies but we did spot one black lamb amongst a field full of white sheep and lamb. According to old folklore, if a farmer did something to upset the fairies then they would place a black lamb in his flock as a warning. So perhaps the fairies are still alive and well! 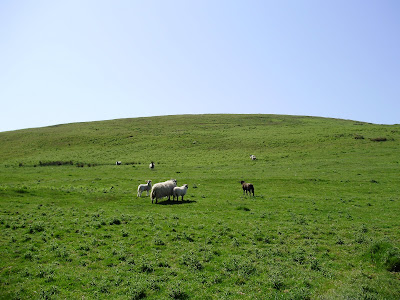 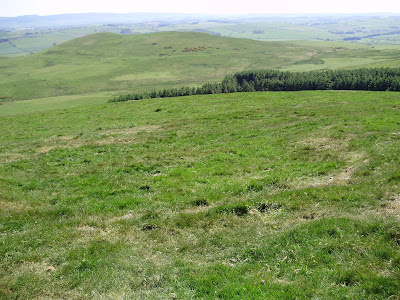 Posted by The Faery Folklorist at 09:11 No comments: