Brown Man of the Muirs - Part 1 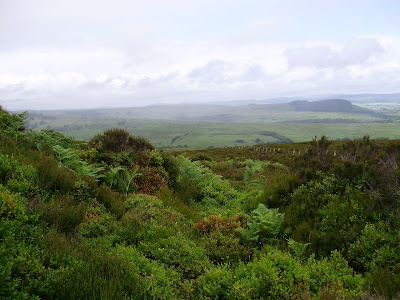 According to Legend, in the moors surrounding the village of Elsdon, lives the Brown Man of the Muirs. A man of dwarven statue dressed in brown, with bright red hair, and a ferocious glare. He is said to be a guardian of the moors and protector of the wild beasties who live there, punishing those who hunt or harm them. A lady named Elizabeth Cockburn of Offerton told a tale of the Brown Man to Robert Surtees, who then shared the story with Walter Scott in about 1809.

"In the year before the great Rebellion, two young men from Newcastle were sporting on the High Moors above Elsdon, and, after pursuing their game several hours, sat down to dine in a green glen, near one of the mountain streams. After their repast, the younger lad ran to the brook for water; and after stooping to drink, was surprised, on lifting his head again, by the appearance of a brown dwarf, who stood on a crag covered with brackens across the burn. This extraordinary personage did not appear to be above half the stature of a common man; but was uncommonly stout and broad-built, having the appearance of vast strength; his dress was entirely brown, the colour of the brackens, and his head covered with frizzled red hair; his countenance was expressive of the most savage ferocity, and his eyes glared like a bull. It seems he addressed the young man: first threatening him with his vengeance for having trespassed on his demesnes, and asking him if he knew in whose presence he stood? The youth replied that he supposed him to be the Lord of the Moors; that he had offended through ignorance, and offered to bring him the game he had killed. The dwarf was a little mollified by this submission; but remarked that nothing coul,d be more offensive to him than such an offer; as he considered the wild animals as his subjects, and never failed to avenge their destruction. He condescended further to inform him, that he was, like himself, mortal, though of years far exceeding the lot of common humanity, and (what I should not have an idea of) that he hoped for salvation. He never, he added, fed on any thing that had life, but lived in the summer on whortle-berries, and in winter on nuts and applies, of which he had great store in the woods. Finally, he invited his new acquaintance to accompany him home, and partake his hospitality: an offer which the young was on the point of accepting, and was just going to spring across the brook (which if he had done, says Elizabeth, the dwarf would certainly have torn him in pieces) when his foot was arrested by the voice of his companion, who thought he tarried long, and on looking around again, 'the wee Brown Man was fled'. The story adds, that he was imprudent enough to slight the admonition, and to sport over the moors on his way homewards; but soon after his return, he fell into a lingering disorder, and died within the year." 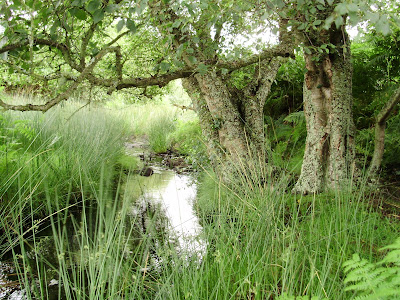 We decided to begin our explorations of the locations of this myth on the moors to the north east of Elsdon. First choice would have been the Keeldar stone itself, where the Brown Man is said to live, but the terrain would be rather ambitious for my current fitness level so it'll have to wait a while! The moors, as shown in the photos above and below, would be the perfect hideaway for the Brown Man, with rocky crags and caves, and masses upon masses of bracken. There were far more sheep wandering around than were probably present when he first moved into the area, but there were signs of rabbits, deer, foxes, and we met a little lizard while stopping for lunch. One thing hasn't changed though, the abundance of whortleberries! 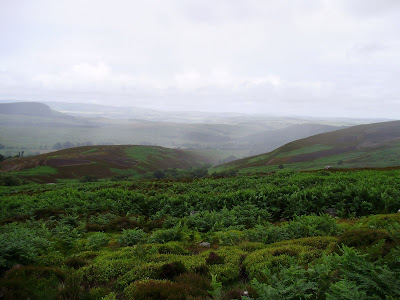 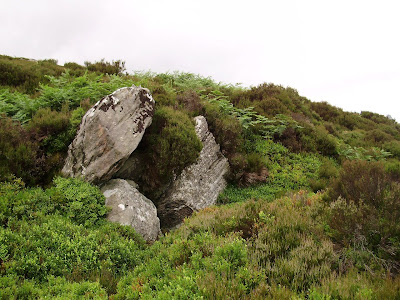 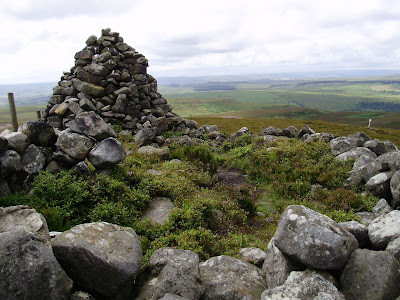 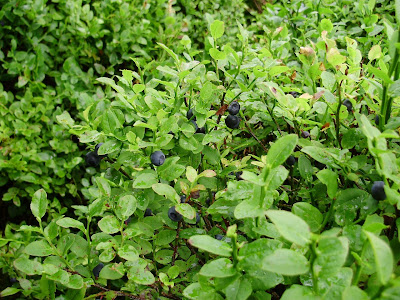 Sources and Further Information
Minstrelsy of the Scottish Border Vol 2, Walter Scott
The Memoir of Robert Surtees, George Taylor
The Lady of the Lake, Walter Scott
Poems and Legendary Ballads Vol 1, William Stuart
Posted by The Faery Folklorist at 09:15 No comments: 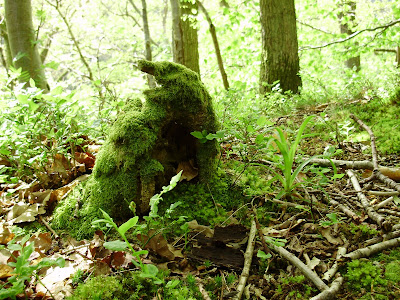 Our next stop was Castle Howe, near Bassenthwaite Lake. According to legend, a man was once climbing to the top of the fort on the hill, when he stumbled and overturned a rock. He continued on but happened to look back, and saw a man dressed in green sitting on the rock that he had overturned. When he looked again, the man had disappeared.
Another story tells of some children who were digging on the hill when they found a hut with a slate roof. When they returned to the same spot after lunch the hut had disappeared, though their spades were exactly how they had left them so they knew they were in the right spot. A few days later the children's father was walking his dog on the hill. He spotted two small people dressed in green, and for some reason decided to set his dog upon them. The dog ran forwards then stopped in its tracks in front of them, and backed away to his master. The small people then stepped into the ground, never to be seen again! 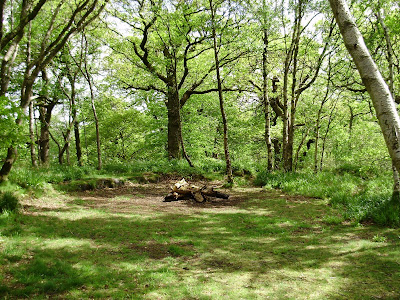 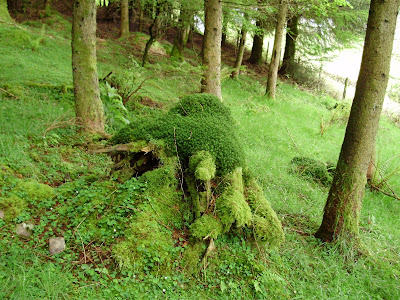 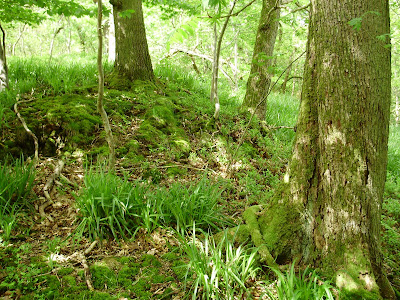 Sources and Further Information
The Secret Country, Janet & Colin Bord
The Modern Antiquarian
Posted by The Faery Folklorist at 12:50 3 comments: 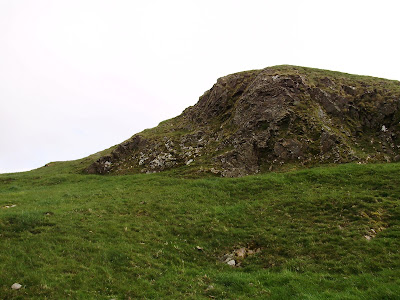 We decided on a weekend away in the Lake District, and after a few minutes searching on the internet, I'd soon come up with a list of possible fairy sites to visit. I say 'possible' as I haven't researched these fairy lore stories as thoroughly as I do for the Northumberland locations, but once I run out of local myths to research I'll soon set about researching the further away ones! :)
First up was Elva Hill, reputed to be a fairy hill and a secret gateway to fairyland. At the top of the hill is a rocky outcrop, and on one side of the hill is an old stone circle. Below you can see Elva Hill both close up and from the base of the hill. Unfortunately the stone circle was off limits due to Bulls in the field. 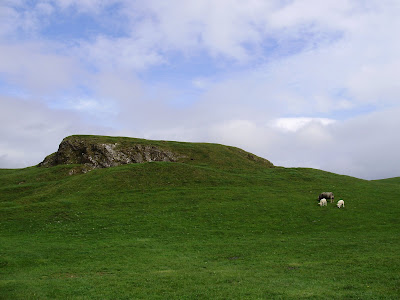 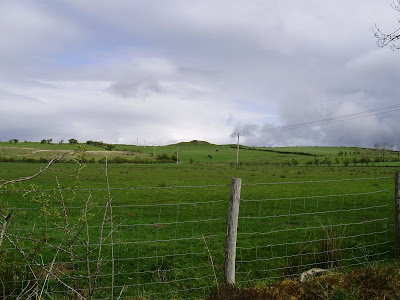 Posted by The Faery Folklorist at 12:21 2 comments: 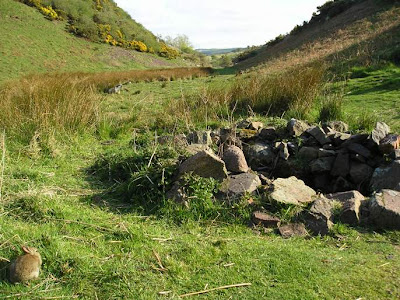 In Wooler, tucked away in a little valley, is a natural spring called the Pin Well or Fairy Well. According to tradition, young people would make a wish and drop a crooked pin into the well. Many years ago there was said to be May Day processions when the towns folk would march from the town to the well, each dropping a crooked pin into the well and making a wish in the belief that before the year was over the fairy who presided over the well would make the wish come true.
Mid-April we ventured down to the well to take a closer look. There was no sign of fairies, but a young rabbit was guarding the well, so perhaps it was the fairy's day off. 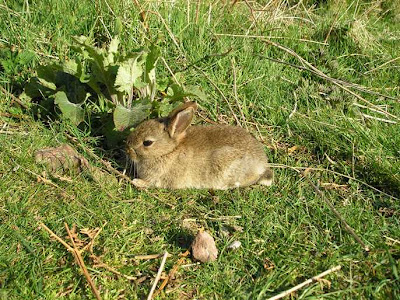 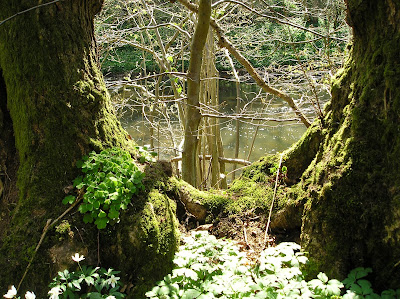 I just wanted to share some of my favourite photographs I've taken on my travels around Northumberland and the surrounding areas. I do not claim to have any photos of actual fairies (fairies are far too clever for that) but these photos show some places that have a definite fairy feel about them. 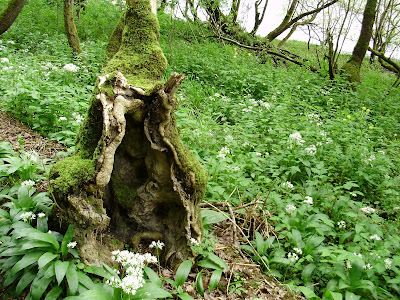 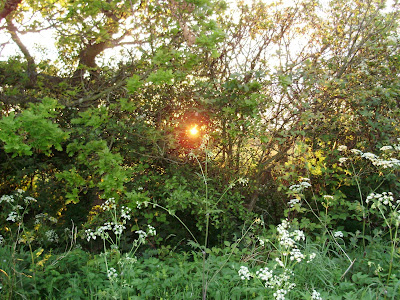 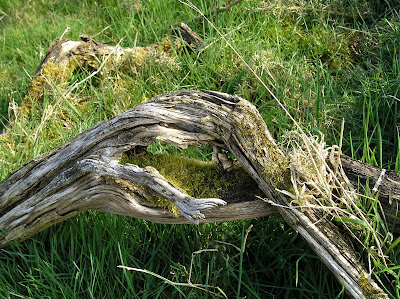 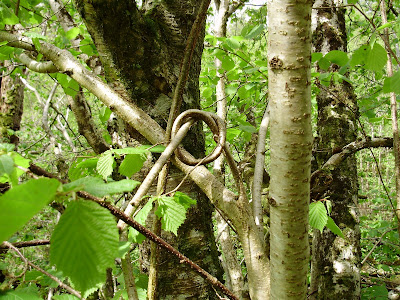 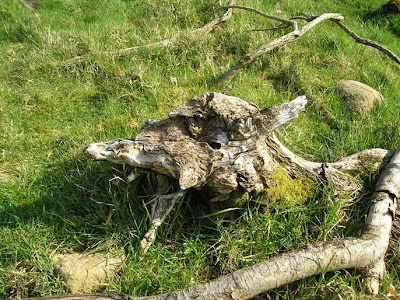 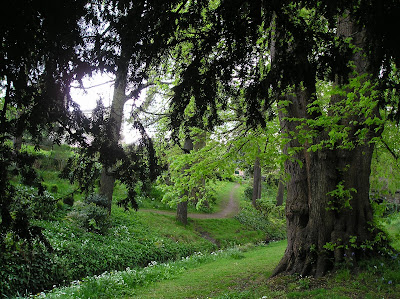 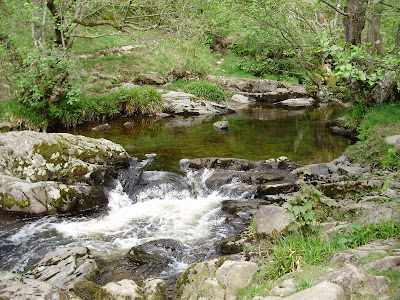 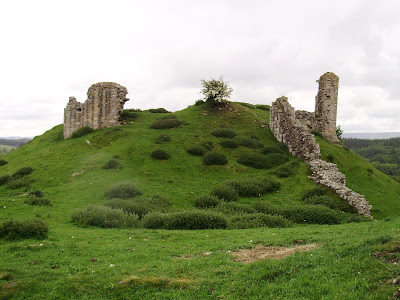 According to folklore, Harbottle Lough is under protection from an unknown creature or person. That there was once a plan to drain the water from Harbottle Lough, but the workmen all fled when a ghostly voice from among the rushes uttered threateningly: "Let alone, let alone, or A'll droon Harbottle and the Peels and the bonny Hallystone". Another version refers to the stone as being a Holy Stone, rather than Hallystone. This probably refers to the nearby Drake or Dragon stone which overlooks the Lough.
My sources do not reveal whether the voices came from the faery folk or a ghostly spirit, but the fae are said to fiercely protect ancient monuments and sacred stones and punish those who do damage to them. Of course, it could just have been a lazy workman who wanted a good excuse to leave work early.
We went to take a look for ourselves a few weeks back, it's a lovely area and very much worth a visit. We also popped into the nearby Harbottle Castle, and although I've not heard any fairy stories from this location, we discovered a lone hawthorn tree in the centre of the castle ruins that would not look out of place in any fairy story. 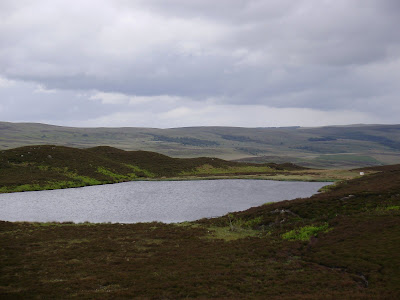 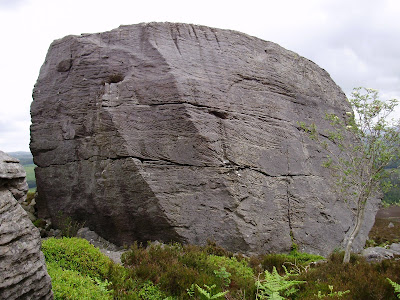 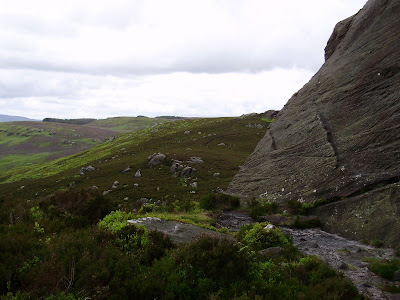 Sources and Further Information
Lore and Legends of Northumberland, Jackson Coleman
The Border Country, David Simpson
The Modern Antiquarian Website
Posted by The Faery Folklorist at 11:04 No comments: