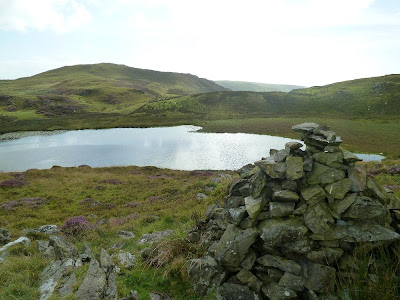 I've been a very lucky lady and have spent a sunny week in beautiful North Wales in search of the Tylwyth Teg, the Fair Family of Wales. This first entry concentrates on a beautiful secluded loch known locally as Llyn Barfog. John Pughe in an article in Archaeologia Cambrensis Vol IV (1853) describes the Llyn as "one of the many communications between this outward world of ours and the inner one of Annwn - the unknown world - the dominion of Gwyn ap Nudd, the mythic king of the fabled realm, peopled by those children of mystery, Plant Annwn.

Pughe paints a beautiful picture of the magic of the Llyn, relating information passed to him by Thomas Abergraes, a "shrewd old hill farmer" well skilled in local folklore. He told the author:


"In years gone by, though when, exactly, he was too young to remember, those dames [Gwragedd Annwn - fairy women of lakes] were wont to make their appearance, arrayed in green, in the neighbourhood of Llyn Barfog, chiefly at eventide, accompanied by their kine and hounds, and that on quiet summer nights in particular, these ban-hounds were often to be heard in full cry pursuing their prey - the souls of doomed men dying without baptism and penance - along the upland township of Cefnrhosucha. Many a farmer had a sight of their comely milk-white kine ; many a swain had his soul turned to romance and poesy by a sudden vision of themselves in the guise of damsels arrayed in green, and radiant in beauty and erace; and many a sportsman had his path crossed by their white hounds of super-natural fleetness and comeliness, the Cwn Annwn; but never had any one been favoured with more than a passing view of either, till an old farmer residing at Dyssymant, in the adjoining valley of Dyffryn Owyn, became at last the lucky captor of one of their milk-white kine."

"The acquaintance which the Gwartheg y Llyn, the kine of the lake, had formed with the farmer's cattle, like the loves of the angels for the daughters of men, became the means of capture; and the farmer was thereby enabled to add the mystic cow to his own herd, an event in all cases believed to be most conducive to the worldly prosperity of him who should make so fortunate an acquisition. Never was there such a cow, never such calves, never such milk and butter, or cheese, and the fame of the Fuwch Gyfeillion, the stray cow, was soon spread abroad through that central part of Wales known as the district of Rhwng yddwy Afon"

But alas his wealth had gone to his head and he soon forgot the importance of his elfin Cow, and fearing that she was now becoming too old to be of profit to him, he fattened her up to send to the butcher. A beautiful fat beast she became and at last the day of slaughter came and neighbours crowded from miles around to witness the slaughter of such a magnificent beast. The butcher bared his arms and raised the knife, but before he could harm the beast his arm became paralysed and the knife dropped from his hand and fell harmlessly to the floor.


"The whole company was electrified by a piercing cry that awakened echo in a dozen hills, and made the welkin ring again; and lo and behold! the whole assemblage saw a female figure clad in green, with uplifted arms, standing on one of the craigs overhanging Llyn Barfog, and heard her calling with a voice loud as thunder:-

"Come yellow Anvil, stray horns.
Speckled one of the lake,
and of the hornless Dodin,
Arise, come home."

"And no sooner were these words of power uttered than the original lake cow, and all her progeny to the third and fourth generations, were in full flight towards the heights of Llyn Barfog, as if pursued by the evil one. Self-interest quickly roused the farmer, who followed in pursuit, till breathless and panting he gained an eminence overlooking the lake, but with no better success than to behold the green attired dame leisurely descending mid-lake, accompanied by the fugitive cows and their calves formed in a circle around her, they tossing their tails, she waving her hands in a scorn as much to say, "You may catch us, my friend, if you can," as they disappeared beneath the dark waters of the lake, leaving only the yellow water lily to mark the spot where they vanished and to perpetuate the memory of this strange event."

The author tells that the greedy farmer soon became impoverish, and few felt pity for such a greedy man who so quickly forgot the wonderful and magical favour he had once recieved from the fairies.

Pughe also tells of further legends of the Llyn, including the Arthurian legend of the Afanc y Llyn, which some believe to have taken place here at Llyn Barfog. There is said to be a rock here that bears the hoof print of Arthur's horse as it dragged the beast from the Llyn. More on this story and directions on finding the Llyn can be found on the Glyn-yr-Aur Website. It is also said to be unlucky and perilous to "let the waters out of the lake". 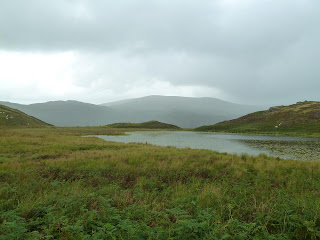 So off we (My partner and I and a waterproof OS map!) wandered to find this beautiful and mystical Llyn, tucked away and hidden from the world. Unfortunately the weather wasn't in our favour and we got half way up the hill when the skies opened up and poured what felt like the entire contents of the Llyn on our heads! I managed to sneak a few photos between showers though, and although I didn't spot any fairy cattle there were no shortage of sheep at the edges of the Llyn, so perhaps the fairies are keeping sheep these days instead! :) 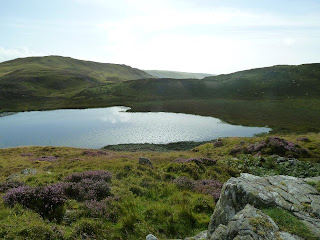 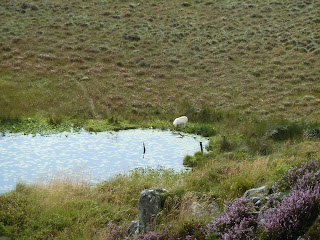 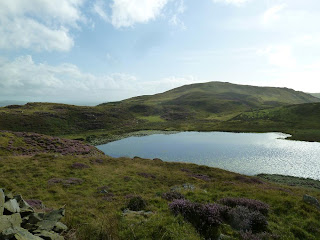 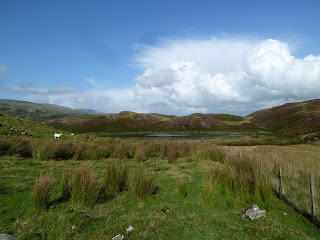