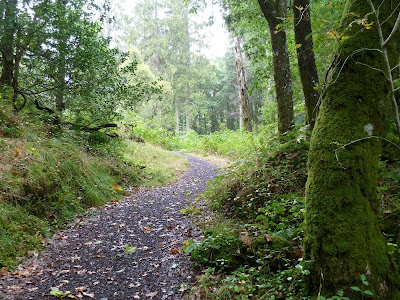 Finally, on my trip to investigate the life of the Reverend Robert Kirk, I come to Doon Hill. It is said that while ministering at Aberfoyle church, Robert Kirk enjoyed taking regular strolls up Doon Hill, known locally as a 'Dun Shi' or Fairy Hill. 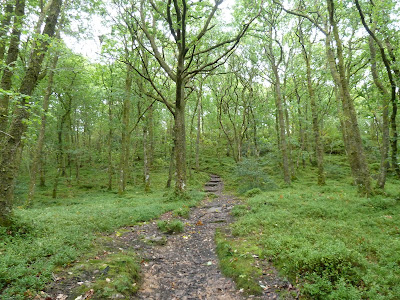 One evening however, Robert Kirk did not return from the hill as usual, infact he never returned at all. His body was found dead on the hill, but it is said that his soul was stolen away by the faeries, who were angry at him for revealing their secrets in his book. The following extract from 'Sketches of Perthshire' by the Reverend Patrick Graham (2nd ed. 1812) tells the story:


"He was walking, it is said, one evening in his night-gown, upon the little eminence to the west of the present manse, which is still reckoned a Dun shi'. He fell down dead, as was believed ; but this was not his fate:

"It was between the night and day,
When the fairy king has power,
That he sunk down (but not) in sinful fray,
and, 'twixt life and death, was snatched away,
To the joyless Elfin bower."

Mr Kirk was the near relation of Graham of Duchray, the ancestor of the present General Graham Stirling. Shortly after his funeral, he appeared in the dress in which he had sunk down, to a mutual relation of his own and of Duchray. "Go," said he to him, "to my cousin Duchray, and tell him that I am not dead ; I fell down in a swoon, and was carried into Fairy-land, where I now am. Tell him, that when he and my friends are assembled at the baptism of my child, (for he had left his wife pregnant) I will appear in the room, and that if he throws the knife which he holds in his hand over my head, I will be released, and restored to human society." The man, it seems, neglected, for some time, to deliver the message. Mr Kirk appeared to him a second time, threatening to haunt him night and day till he executed his commission, which, at length, he did. The time of the baptism arrived. They were seated at table; Mr Kirk entered, but the laird of Duchray, by some unaccountable fatality, neglected to perform the prescribed ceremony. Mr Kirk returned by another door, and was seen no more. It is firmly believed that he is, at this day, in Fairy-land." 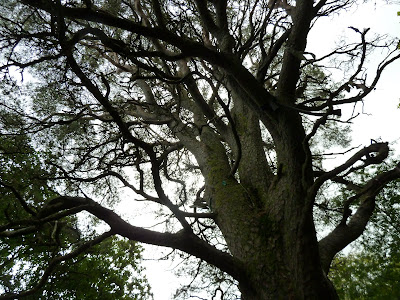 So up the faery trail I ventured, to the summit of Doon Hill. As I strolled along the pathway the sunlight twinkled through the tree branches, and mushrooms glistened with the morning dew... 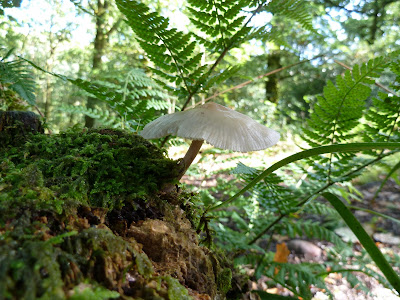 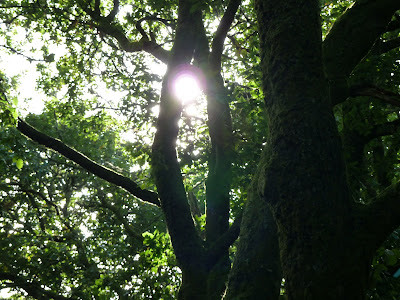 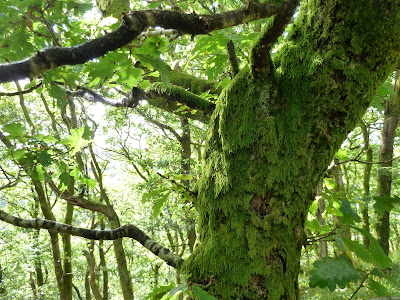 Up we go, further up the hill... past the faery washing line... 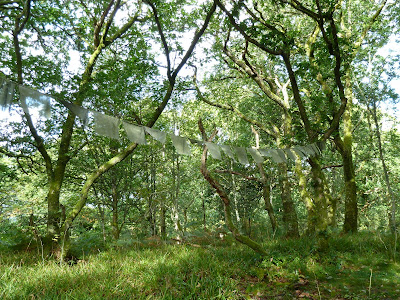 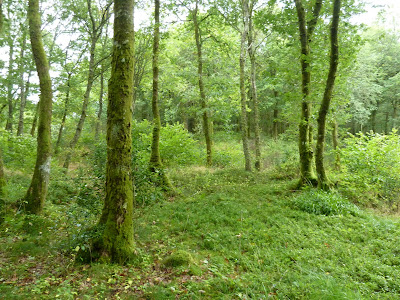 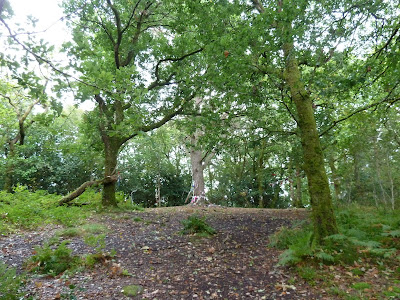 As you reach the top of the hill the pathway leads through 2 trees, as is often the case when entering the land of faery, and before you stands a large imposing figure of a tree, a solitary pine. The Minister's pine. 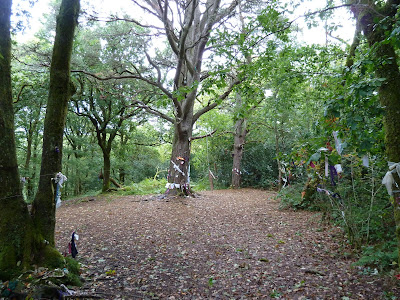 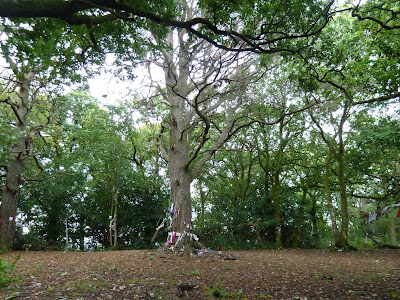 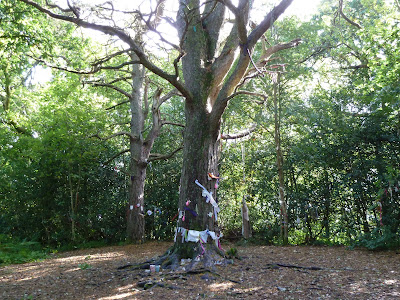 I love the photo below with the light shining through the branches of the Minister's Pine. My camera has this lovely habit of sticking random blue and green lights in photos when it feels like it, I've been told it's something to do with light reflecting off the lense and bouncing off the camera goblins that lurk in the dark spaces where the film would go in normal cameras. 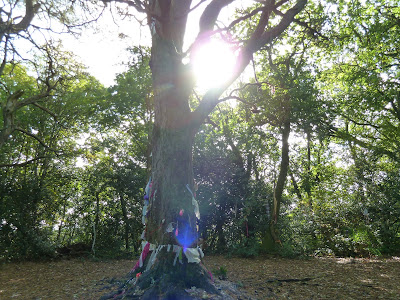 A quick note: I'm not sure how other people feel about this, and I don't mean to offend anyone, but I feel a little sad at the amount of man made materials left at fairy sites. I'm sure the fairies would much prefer natural offerings like pretty stones and shells, feathers, or perhaps some hazelnuts they can share with the squirrels. Plastic ribbons and bags will take an age to decompose, and might get eaten by wildlife and make them very ill, so please take care and don't make the fairies angry.
Sources & Further Information
Sketches of Perthshire, Reverend Patrick Graham (2nd ed. 1812)
Walk Highlands - Doon Hill
Site of Scientific Interest - Doon Hill & Fairy Knowe
Posted by The Faery Folklorist at 11:13 7 comments: 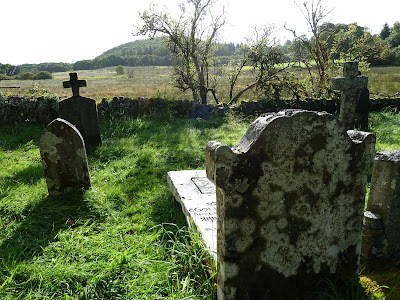 The following day I wandered to the remains of the church in Aberfoyle, where Reverend Robert Kirk settled after leaving Balquhidder. His father, Reverend James Kirk, was also previously a minister of the church. It is said that the Reverend enjoyed taking walks up nearby Doon Hill, said to be a local haunt of the faeries. In the photo above you can see the back of Robert Kirk's grave, looking towards Doon Hill in the background. 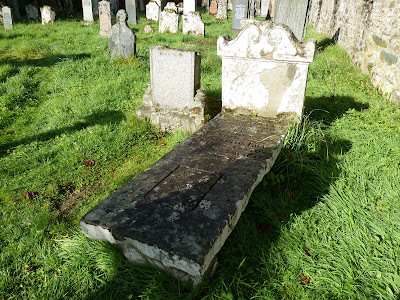 Below, some photos taken around the church and graveyard. Unfortunately the church where Robert Kirk ministered has long since gone, though it was replaced by a new church in 1744 but that has since fallen into disrepair and the roof is no longer present, but this does allow for a lovely variety of plant life to grow nestled inbetween the fallen bricks and graves. 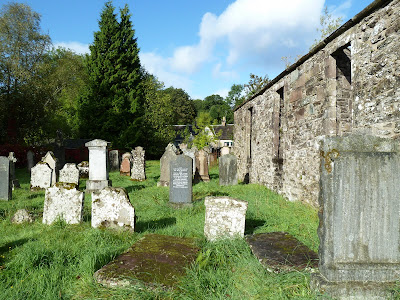 Just incase you were wondering, the large coffin shaped pieces of metal outside the entrance below are mortuary weights. These were placed on fresh graves to stop thieves stealing the bodies to sell to scientific research. Charming!! 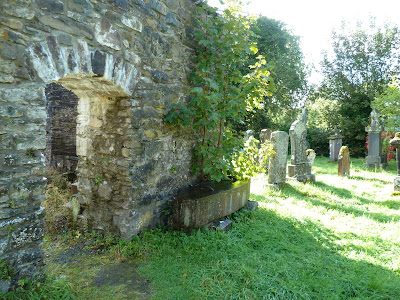 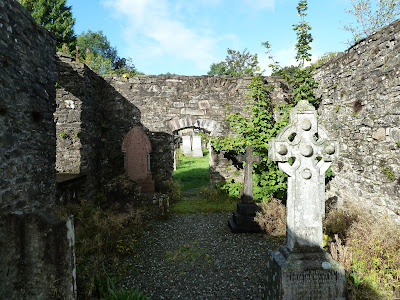 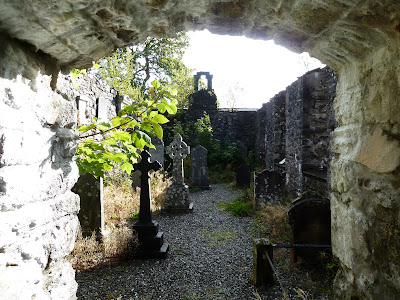 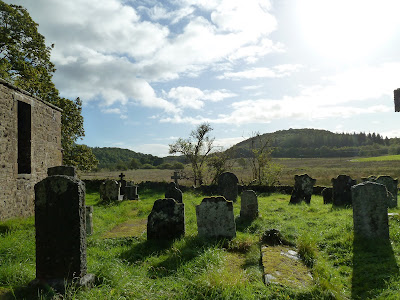 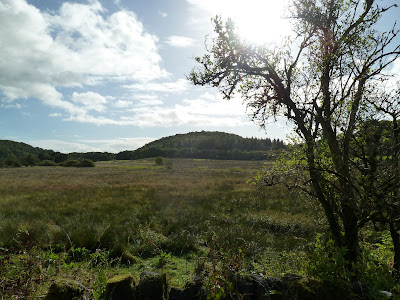 It's still a very magical place, and it's easy to see why Reverend Kirk chose Doon Hill as his favourite place to ramble in the mornings, with it being so nearby and watching over him every day whilst he worked in the church.
Next, a trip to Doon Hill.... 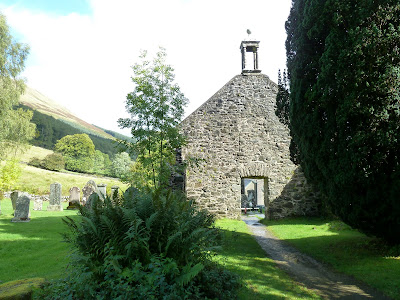 The Reverend Robert Kirk (c.1644-1692) was a student of theology and perhaps more importantly, the seventh son of Mr. James Kirk, the minister of Aberfoyle. Due to being the seventh son he was said to be gifted with the highland second sight, and is famous for his fascination with the faery and for writing down his findings in the 'Secret Commonwealth of Elves Fauns and Fairies'. His book is said to have been written in 1691, though it is thought that it remained unpublished until discovered by Sir Walter Scott, who printed 100 copies in 1815. He also provided the first translation to Gaelic of the book of Psalms. I have long been fascinated and intrigued by the life of Robert Kirk, and perhaps more fascinated with the mysteries surrounding his death, but i'll speak more on that later.

First on my list of places to visit to learn more about the Reverend Kirk was Balquhidder. It was here that Kirk was said to have first met the faeries. Balquhidder has long been seen as a very magical place and some say it is a "thin place" where the boundaries between this world and the other world meet. The first church was built there after St Angus visited in the 8th or 9th century, but it wasn't until 1664 that Robert Kirk arrived and took his place as Episcopal minister. The church where he ministered was built in 1631, but has since fallen into disrepair and now sits as a mossy ruin with some splendid yew trees growing inside. 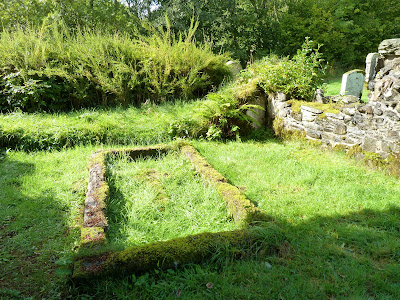 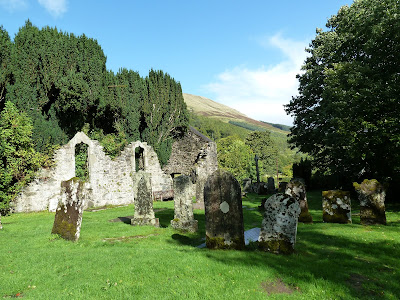 In the graveyard lies the grave of Robert Kirk's first wife Isobel Campbell, whom he married in 1678. Unfortunately Isobel passed away only a couple of years later. It is said that Kirk decorated her gravestone himself, though unfortunately the stone is very weather worn now and difficult to read, as shown in the photograph below (the grave in the centre of the photo, set flat into the ground). 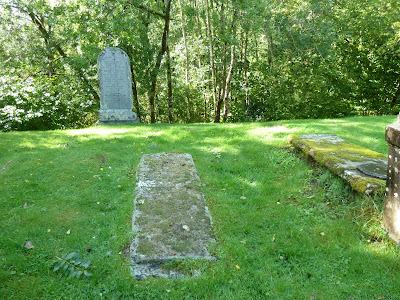 The photograph below shows 'Tom nan Aingeal', the hill of fire. Located just above the kirk and graveyard, it was here that fires were lit during the Beltane and Samhain celebrations in the hope that the ancient gods would bring warmth and light. The grave on the hill belongs to the Reverend Eric Findlater, who ministered in the area for forty years. 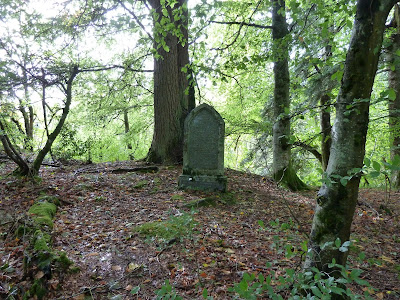 If you follow the path leading to the hill above the kirk, past the mossy covered walls of the graveyard, you will come to a bridge across an enchanting waterfall. According to leaflets at the current church, a ghostly wild hunt is said to ride through these parts. 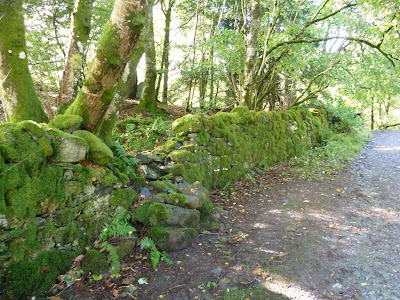 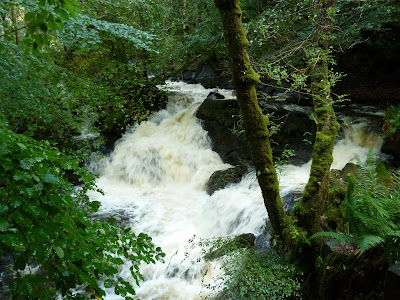 Finally I include a photo of the bell hanging in the modern day church next to the site of the old kirk where Robert Kirk ministered. This bell was donated to the kirk by Robert Kirk. 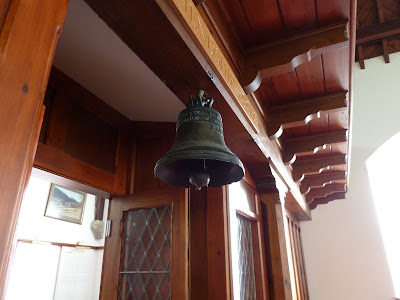 The Reverend Robert Kirk left Balquhidder in 1685 to return to Aberfoyle, where I will visit in my next blog.

I apologise for my lack of blog updates this year, I've been moving house and my weekends have been taken over by gardening and decorating! All settled now though, so there'll be more blog posts soon I promise. Though if anyone happens to have a house brownie looking for a new home, I'd be more than willing to offer all the milk and butter he can eat, in exchange for some help with the housework! :)

Next week will be an exciting week for me, i'll be visiting somewhere i've been meaning to go for a long time... Doon Hill! Off in search of the Reverend Robert Kirk and the mysteries surrounding his disappearance all those long years ago. I'll be doing my best not to offend the faery folk, but should I not return then can someone kindly throw an iron dagger over my apparition should they see me passing by?
Posted by The Faery Folklorist at 21:59 No comments: