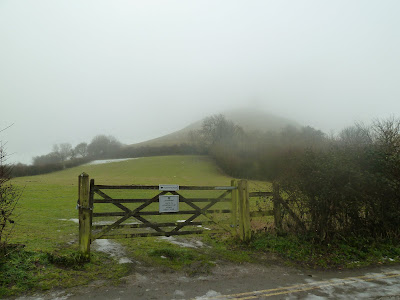 Glastonbury Tor has a long standing association with the fairy folk, as well as it's associations with early Christianity, Arthurian legends, the Isle of Avalon, and the doorway to Annwn - the Celtic otherworld. Perhaps it's most famous fairy story is that of the meeting between St Collen and Gwyn ap Nudd, King of the fairy folk and Lord of Annwn. Below is the story, as told in the end notes of the 1906 edition of Lady Guest's translation of the Mabinogion:

"A very curious legend, in which Gwyn ab Nudd bears a conspicuous part, is contained in the Life of St. Collen (Buchedd Collen), which is printed in a collection of Welsh remains, entitled the Greal. This Saint was the son of Gwynawc, ab Caledawc, ab Cawrdav, ab Caradawc Vreichvras, and having distinguished himself greatly in foreign countries by his zeal and piety, he returned to Britain and became Abbot of Glastonbury ; after a time Collen desired to lead a life of greater austerity than his high office at Glastonbury permitted ; so he departed thence, and went forth to preach to the people. The impiety, however, which he met with distressed him so much, that at length he withdrew to a mountain, " where he made himself a cell under the shelter of a rock, in a remote and secluded spot

"And as he was one day in his cell, he heard two men conversing about Gwyn ab Nudd, and saying that he was king of Annwn and of the Fairies. And Collen put his head out of his cell, and said to them, 'Hold your tongues quickly, those are but Devils.' — Hold thou thy tongue,' said they, I thou shalt receive a reproof from him.' And Collen shut his cell as before.

"And, soon after, he heard a knocking at the door of his cell, and some one inquired if he were within. Then said Collen, 'I am St. Collen, who is it that asks?' 'It is I, a messenger from Gwyn ab Nudd, the king of Annwn, to command thee to come and speak with him on the top of the hill at noon.'

"But Collen did not go. And the next day behold the same messenger came, ordering Collen to go and speak with the king on the top of the hill at noon.

"But Collen did not go. And the third day behold the same messenger came, ordering Collen to go and speak with the king on the top of the hill at noon. ' And if thou dost not go, Collen, thou wilt be the worse for it'

"Then Collen, being afraid, arose, and prepared some holy water, and put it in a flask at his side, and went to the top of the hill. And when he came there, he saw the fairest castle he had ever beheld, and around it the best appointed troops, and numbers of minstrels, and every kind of music of voice and string, and steeds with youths upon them the comeliest in the world, and maidens of elegant aspect, sprightly, light of foot, of graceful apparel, and in the bloom of youth ; and every magnificence becoming the court of a puissant sovereign. And he beheld a courteous man on the top of the castle, who bade him enter, saying that the king was waiting for him to come to meat. And Collen went into the castle, and when he came there, the king was sitting in a golden chair. And he welcomed Collen honourably and desired him to eat, assuring him that, besides what he saw, he should have the most luxurious of every dainty and delicacy that the mind could desire, and should be supplied with every drink and liquor that his heart could wish ; and that there should be in readiness for him every luxury of courtesy and service, of banquet and of honourable entertainment, of rank and of presents : and every respect and welcome due to a man of his wisdom.

"I will not eat the leaves of the trees,' said Collen. 'Didst thou ever see men of better equipment than those in red and blue?' asked the king. "Their equipment is good enough,' said Collen, 'for such equipment as it is.' "What kind of equipment is that?' said the king." Then said Collen, 'The red on the one part signifies burning, and the blue on the other signifies coldness.' And with that Collen drew out his flask, and threw the holy water on their heads, whereupon they vanished from his sight, so that there was neither castle, nor troops, nor men, nor maidens, nor music, nor song, nor steeds, nor youths, nor banquet, nor the appearance of any thing whatever, but the green hillocks."

Other versions of the above story suggest that the events took place at Llangollen in Wales instead. Considering how long ago the events are said to have taken place, it's hardly surprising that so many variations exist! 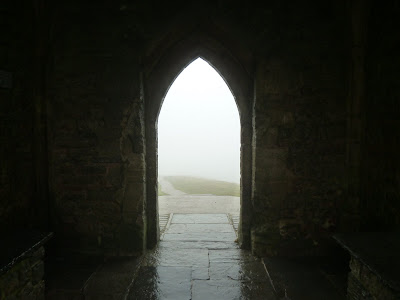 Having spent the first 27 years of my life in Somerset, to say I've visited Glastonbury a few times would be a bit of an understatement! I've visited few places with such magic and beauty, and I think Glastonbury will probably always be my favourite place to be. Whilst visiting my family over the festive season, I popped along to Glastonbury and it was one of my most magical visits yet. Most of the snow had melted but some remained in the shadows, the trees were covered in frosty icing, and a thick misty fog had enveloped the tor. One minute the tor was there, and the next it had gone, hidden behind the mist! It was indeed as if this world had passed and another stood in its place, peaceful and silent, and filled with wonder. 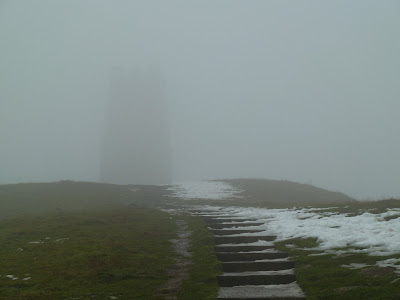 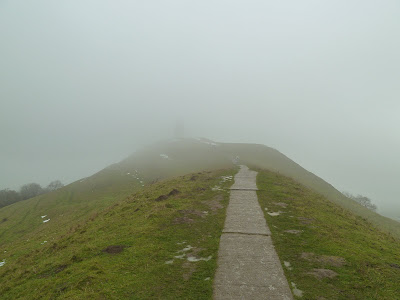 Little imagination was needed to see the mystical fairy landscapes and imagine the fairies trooping out of the fog and into our world, and although I didn't meet Gwyn himself, I did have a lovely visit from some hungry crows who politely asked if i'd mind sharing my breakfast with them. Who could refuse such an offer! 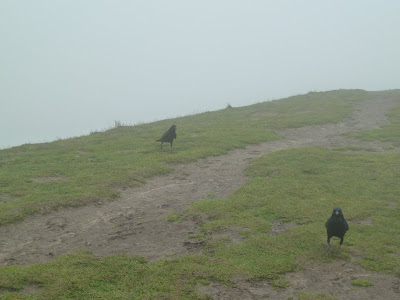 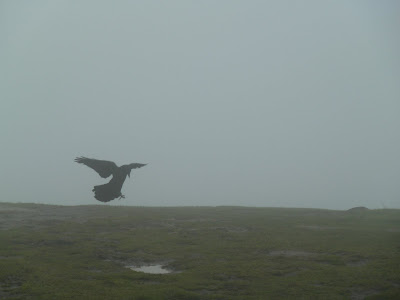 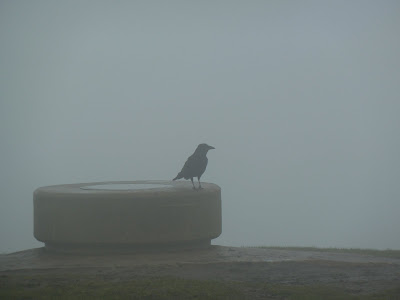 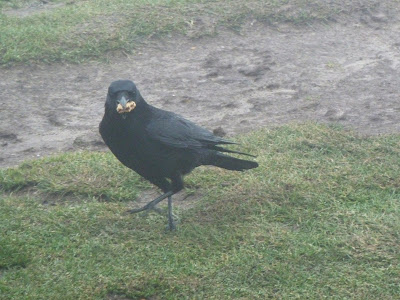 Also worth a visit in Glastonbury are Gog and Magog, a pair of enchanting ancient Oak trees. These beautiful gnarled old trees are full of stories to share, and i wouldn't be surprised at all if there are a few fairies hiding in between the roots. I didn't get a chance to visit them this time, but here are a couple of photos I took of them on a previous visit when the weather was a bit warmer and the trees a little greener. 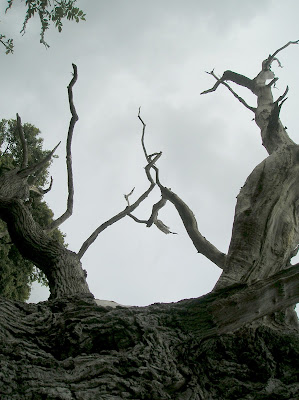 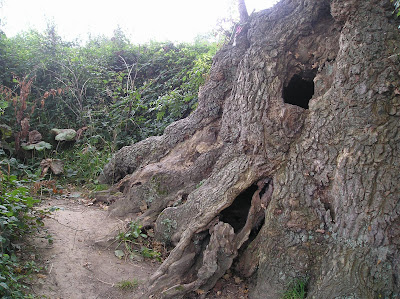 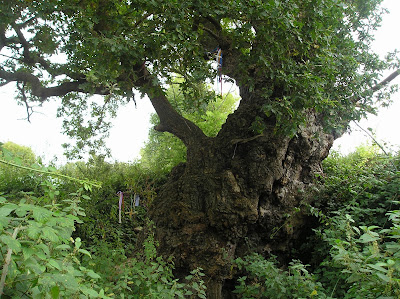 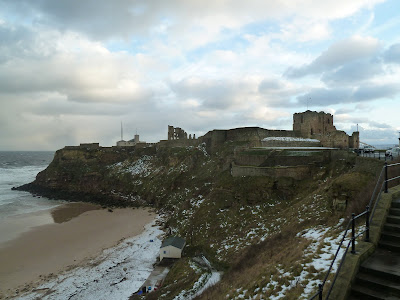 Just a short walk down the coast from the Fairy Caves of Cullercoats, is a coastal town called Tynemouth. Many have heard of Tynemouth priory, or perhaps even the ghosts that haunt the priory, but few are aware of the mysterious cave below where infernal spirits are said to dwell. The cave is best known to locals as Geordie's Hole or Jingler's Hole. Some say that it was part of an underground passage with vaults, possibly dungeons, maybe connected to the priory itself. Others say that the "Wytche of Tinemouth" lived there, others say a wizard. Others say the name came from an old man living in the cave who used to prowl around at night making a strange clanking noise, terrifying the local children.


According to an article on Tynemouth Priory in the Monthly Chronicle (1887), fairies were also said to live in Tynemouth:

"Tynemouth, in the olden time (and that not so far back either) is declared to have been a favourite haunt of the fairies. An old woman, whom a friend of ours visited the other day to gather any particulars she might know respecting the mythical Jingler, was told that her recollections went back at least sixty years, and that the story was already an old one when she was a girl, but that she had herself actually seen the fairies, so that was no mere hearsay."

Other sources suggest that far more sinister creatures are dwelling at Tynemouth. According to a poem in Hone's Table Book (1827), which is the earliest reference to the caves I have managed to find so far, the inhabitants of these mysterious cave are infernal beasts and demons who are guarding a great wealth of treasure. Young Walter, the son of a knight, was told by his mother of wondrous wealth and "treasures in keeping of Sorcery" to be found "far 'neath the sea, in a deep rocky cell, bound down by the chains of the strongest spell". Eventually, on the Eve of St Johns, Young Walter ventures forth to seek the treasure and finds the entrance in the rocks:

Down deep in the rock winds the pathway drear,
And the yells of the spirits seem near and more near,
And the flames from their eye-balls burn ghastly blue
As they dance round the knight with a wild halloo."

Fierce dragons with scales of bright burnished brass,
Stand belching red fire where the warrior must pass;
But rushes he on with his brand and his shield,
And with loud shrieks of laughter they vanish and yield.

Huge hell-dogs come baying with murd'rous notes,
Sulphureous flames in their gaping throats;
and they spring to, but shrinks not, brave Walter the Knight
And again all is sunk in the darkness of night.

Walter seizes a bugle horn from the wall and blows into it a loud blast, 3 times, as it turns into a snake with the mouthpiece containing the asp's poisonous fangs. A magic cock, perched on the gate, wakes and shakes its wings. It lets out a loud crow, and all the infernal demons vanish, leaving Walter to escape with all the treasure he can carry.

Unfortunately there were a series of landslides and the cave entrance is said to have collapsed and closed for good, which is probably for the best considering the amount of infernal creatures said to dwell in there! I decided to pay a visit over the winter months to see if any signs of an entrance could be seen once the summer's greenery had died away to reveal the rocks below, but unfortunately none could be seen. It's unlikely the infernal creatures will be escaping anytime soon, but if you're walking past late at night and hear a distance jingling coming from inside the cliffs, you might want to quicken your step and hurry home just in case! 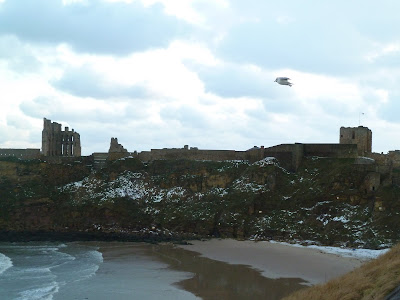 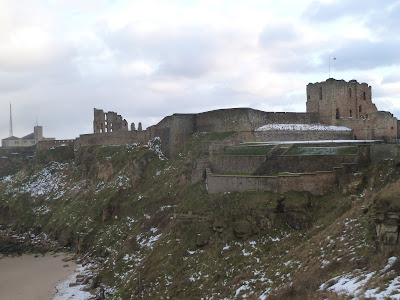 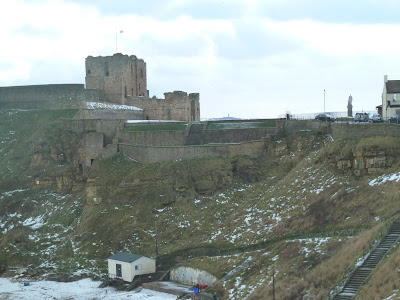