The Mystery of MacKinnon's Cave 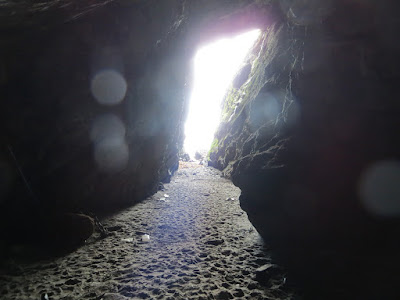 On the west coast of the Isle of Mull, tucked away on the coast next to a beautiful waterfall, can be found a mysterious sea cave known as MacKinnon's Cave. According to local legend the cave is a dark and foreboding place, and although versions of the story vary, all seem to end with those who enter the cave meeting an unfortunate and gruesome death. The most detailed account can be found in Maclean's History of the Island of Mull, Volume 1 (1923):


"There is a story that twelve men of Clan Fingan set out to explore Mackinnon's Cave, headed by a piper. Another party walked on the surface, keeping pace with the music. When the party in the cave reached the extreme limit, the fact was to be signalled by a bar of music, and the party above was to mark the spot. After travelling some distance the explorers encountered a fairy woman, who made an attack and slew the party one by one, save the piper, whose music so charmed her that she offered to spare him so long as he did not cease to play on the pipes. The piper retraced his steps to the entrance of the cave, closely followed by the fairy. She agreed that when he saw the light, he could go in peace. He staggered along in the dark, almost overcome by exhaustion, but bravely pouring out his breath, in hopes of reaching his haven. The notes became harsh and discordant, the drones began to groan and the chantes to screech. In spite of the struggle, the contest was too great. The music ceased, and then the fairy attacked and slew him. The harsh notes of the pipe warned the party over the cave that some calamity had befallen the explorers, and unsheathing their swords they rushed to the rescue. Just as they gained the entrance the piper finished his last bar. They found the mangled body of the piper beyond which were the bodies of his companions."


An earlier mention of MacKinnon's Cave can be found in Boswell's The Journal of a Tour to the Hebrides with Samuel Johnson (1898) where the cave is described as "a narrow passage about six feet wide, obstructed by large stones, over which, having passed, there is a second cave of about twenty-five feet in breadth ; and here is a square stone called Fingal's Table." This 'table' can still be seen today, a massive flat stone in the deepest part of the cave. When we visited the table was looking particularly eerie, with a large circle of burnt out tealight candles... 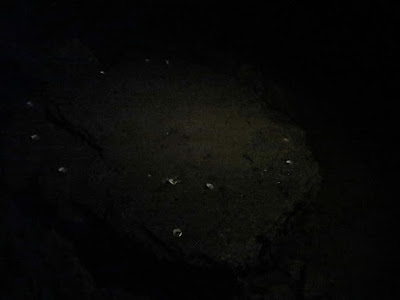 Boswell tells that "The cave derives its same from a tradition that a gentleman of the name of Mackinnon was lost in seeking to explore the cave", but no mention is made of a piper or of Mackinnon's unfortunate fate.

Curiously, Boswell's later published The Life of Samuel Johnson: Including a Journal of a Tour to the Hebrides, Volume 1 (1932) gives a slightly different account and tells that "a piper and twelve men once advanced into this cave, nobody can tell how far, and never returned." He also adds that "A great number of the McKinnons, escaping from some powerful enemy, hid themselves in this cave till they could get over to the isle of Sky."

More recent versions found of the tale on various websites tell of a piper trying to defeat the fairies in a piping competition, and he walked into the cave accompanied by his dog. Only the terrified dog returned alive, but with his fur burnt off. In some versions of the tale he emerged on the other side of the headland, near Loch Scridain.

I haven't managed to find an earlier written source to back up this version of the tale in relation to MacKinnon's Cave, but there are similiar tales on the Isle of Skye and elsewhere. Swire's Skye: The Island and its Legends (1961) tells of a piper called MacCrimmon who entered a cave with his little terrier dog, whilst his sons and friends followed the sound of his pipes above ground. Near Fairy Bridge the pipes suddenly ceased but barking could still be heard and they followed it to Dhubaig where out of a cave ran the little terrier, with every hair singed off his body. Perhaps MacKinnon and MacCrimmon have become confused over the years.

According to the Calmac website, the piper met a female ogre in MacKinnon's cave, who killed him after he failed to please her with a tune from his pipes.

So the true story of what happened in this cave remains cloaked in mystery, but the stories certainly seem to suggest that something unpleasant lurks deep within this cave. Not one to be scared easily, I decided to find out for myself, accompanied by my husband for moral support (and to help me climb over the rocks, he's part mountain goat I swear). A great detailed description of how to find the cave can be found on the Walk Highlands website, though be warned the walk does involve a lot of scrambling over large boulders and slippery rockpools, and the cave can only be reached at low tide. Here's a few photos from our visit to the cave: 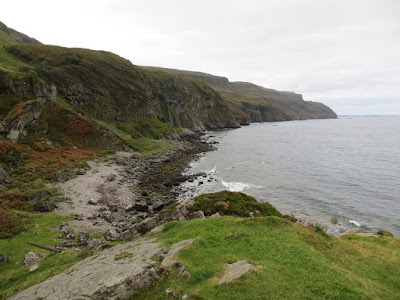 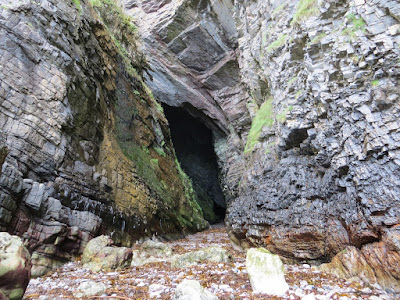 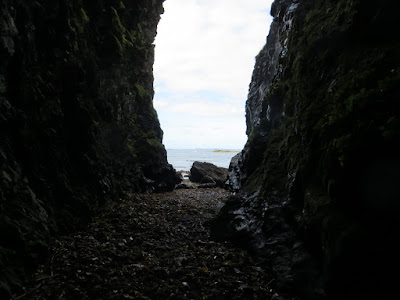 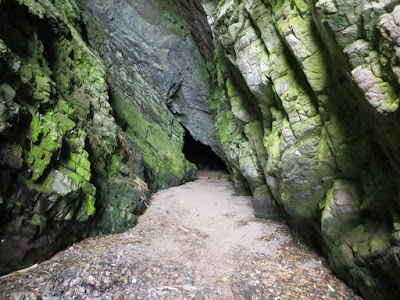 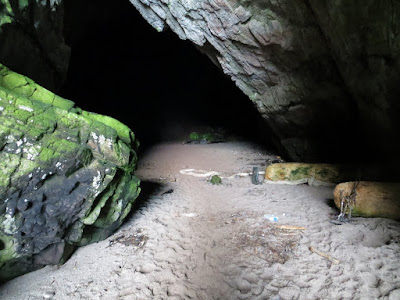 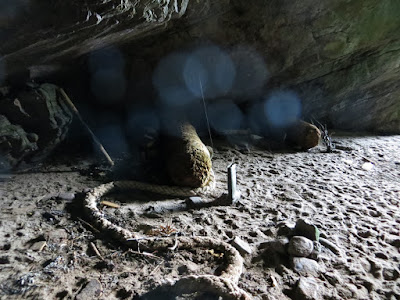 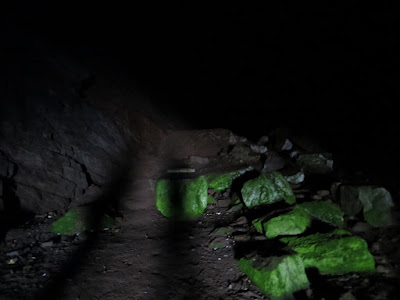 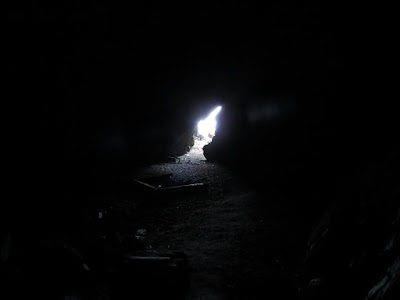 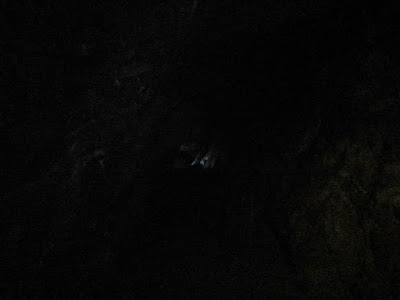 Perhaps there's still something living in the cave after all, when I zoomed in on the above photo I spotted a face in the rocks, a trick of the light or something more mysterious? 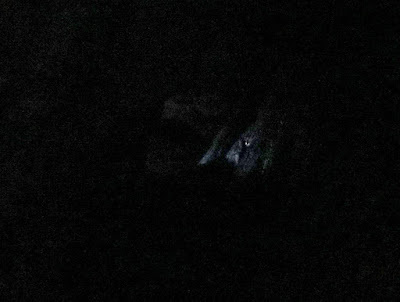 Posted by The Faery Folklorist at 10:29 No comments: