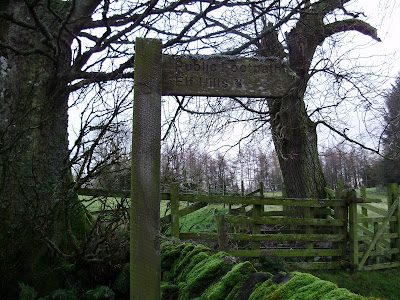 In a little village in Northumberland called Cambo, curious signposts can be found pointing to the 'Elf Hills'. I am unsure if the name refers to a specific hill or a range of hills, but it appears on OS maps and older local maps as being just outside the village of Cambo, and next to a farm that also shares the name of 'Elf Hills'. Although the hills seem to have been given their name a great long time ago, the earliest mention I have found of the name being used in connection to fairies dates back to 1844, where it is briefly mentioned in volume 2 of the Local Historian's Table Book as being a haunt of the fairies, but unfortunately no further details are given. A more detailed account is given in 'Tales and Legends of Northumbria' by M Douglas (1934):

"The Elf-hills at Cambo were the haunt of the moorland Elves, dressed in the brown and gold of the heather and bracken among which they made their home. They were disturbed not at all when the hot-trod made their appearance, summoning Northumbrians to meet a border raid."

"The Elf-Hills near Cambo - that is, Cambo Hill, where Sir John de Cambo kept watch and ward - had, as permanent tenants, a gregarious band of "the little people" who did not in the least resent that their stronghold was often invaded and used again and again as a signal tower on which the wisp of tow mounted on a spear-point was set on fire when a raid was imminent."

Perhaps the most interesting stories relating to the Elf Hills can be found in a book called 'In the troublesome times' published by the Cambo Women's Institute in 1929. The book contains stories of local folklore and customs collected from local residents, and the Elf Hills gets many a mention including:

"Two or three other people, including Mrs Hedley of Elf Hills, have mentioned, or pointed out, "the ring on the knowe yonder".

"I think there's only one story about Elf Hills, that Elves danced around in a circle, and made a ring, and it's there yet." - Edith Henderson of school age, Scots Gap.

"My grandfather, who brought me up, used to tell me about the elves at Elf Hills." - Mrs Keith, refering to her grandfather Henry Codling

"My wife's brother, Hedley of Elf Hills, found a spear sticking out of the runner(small stream) down yonder near Prior Hall." - George Shade [the book goes on to say that the local area was dug up and ancient bracelets were found].

"My husband used to point out the elves' track from Elf Hills to Rothley Mills to us, it is in the field where the water is." - Mrs Thomas Hepple

I find the above quote especially interesting as nearby Rothley Mill is also famous as being a haunt of the fairies. The book goes on to say that the track runs from West to East and that Mr Robert Hepple explained in an Institute meeting that the track is distinct from the church track. What I wouldn't give to have been a fly on the wall at that Women's Institute meeting!

On a freezing cold and rainy Sunday, myself and my partner battled against the elements and made a visit to the Elf Hills. It nearly finished before it had begun when on the walk along the path to the hills I stopped to take some photos of the lovely old trees, and was so engrossed with their beauty that I turned around and walked straight into a tree branch hanging at head height! Luckily my head was well padded with woolley hats, but i'm sure the fairies got a good laugh out of it! 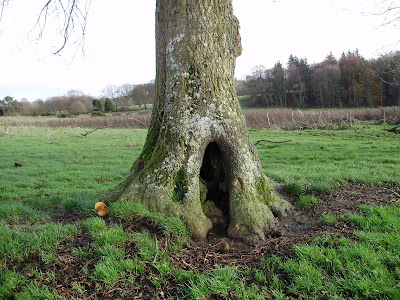 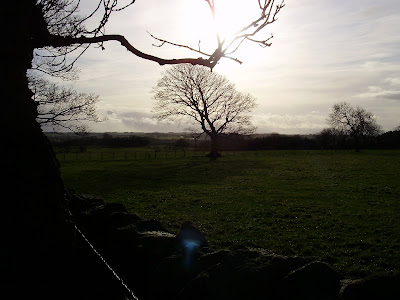 (Rain reflecting off the lense, almost looks like an etherial fae perched on the wall!)
Onwards to the Elf Hills we walked and I can see why these were once considered to be the dwelling place of the Elven folk, the lush green fields go on as far as the eye can see, and dotted along them are sunken pits densely covered in bracken and twisted gorse branches, the perfect hiding place for fairies! As you can see from the bottom photo, there are still circular patches where the grass won't grow, perhaps due to old quarry works below the soil, or maybe just from the nightly fairy dances! 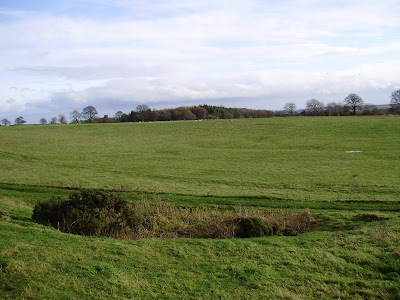 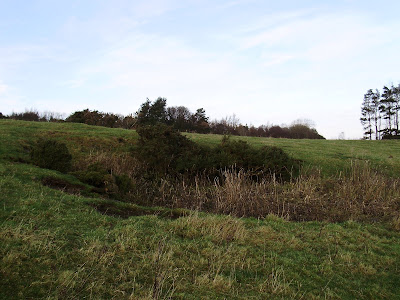 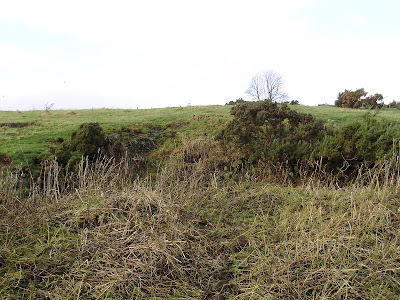 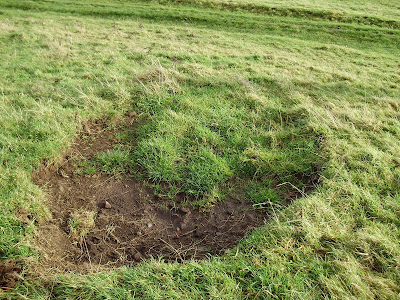 For anyone intrigued by possible name origins of the Elf Hills, there is a fascinating paper called 'Are there any Elves in Anglo-Saxon Place-Names?' by A Hall (2006) available here on the University of Glasgow Website.

Posted by The Faery Folklorist at 15:26

I'm new to your site, and I am completely enthralled with your journies! Love your photographs and your written entries. Can't wait to read up on your previous adventures. Thanks so much for this wonderful site!

Thank you for your kind words, i'm glad you enjoy reading my blog! :D

I'm also very, very jealous of you! Going to all these beautiful places, haunted and haunting. Your love for the world of faerie is inspiring, though. Nonetheless, I'm jealous!

Hehe aw thanks, no need to be jealous though, there's fairy legends all over the world, have a look and I daresay you'll find some near you too! :D

I suppose I'll try to find some cactus faeries, though they do tend to be a bit prickly. OK, sorry about the pun.

There's not as strong a faerie tradition here in the middle of New Mexico as there is in Europe. But still, they're around here somewhere! I'm just going to have to keep clear of the tricksy coyotes.

Are you still there? What an absolutely delightful site! Listen, I'm doing a new edition of a book I wrote 20 years ago, called Spirits of the Stones. Do you have any poignant, pithy anecdotes about anything you might have experienced at any of the ancient sites. As an ex-Ashington Lad I wandered all over Northumb when I was younger but never managed to get to the Hen Hole. At last I've seen photos of it!

Hi Alan, I am indeed still here :) Unfortunately I don't have any anecdotes to add that I can think of, you could try asking on the Mysterious Britain and Ireland facebook group though if you use facebook, it's an active chatty group, sure some members there will have a tale or two to tell! :)