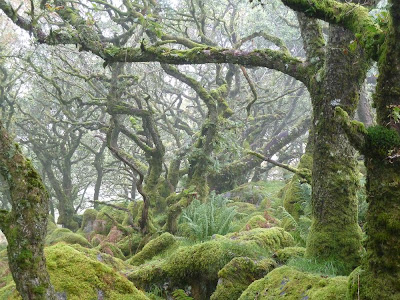 This entry is a little bit different, but I hope it will still be of interest to readers of the blog. Whilst researching pixies and fairies I come across a lot of information about other folkloric creatures and characters, and particularly find interesting those of hell hounds and wild huntsmen. I think the character of the wild huntsman or dark rider is a very primal being, possibly one of the oldest, that of a strong and wild man who rides the forest, hunting prey without mercy. This isn't the hunting of the modern world, for fun and sport, this is hunting to kill for survival. For the record i'm a vegetarian and very much against the hunting of animals, but there came a time when hunting was a part of the cycle of life, and man was hunted as well as the hunter. The wild huntsman reminds us of these days, a time when man would hear the pounding of hooves approaching, and feel the wild fear in his thumping heart, and the adrenaline coarsing through his body as he ran to save not only his life, but his immortal soul too.

Interestingly, the fairies also find their way into the myths of the Wild Hunt. Are they not said to hunt with elf-shot? Striking humans with these rough flint implements, leaving them crippled or worse. According to Robert Kirk's 'The Secret Commonwealth of Elves, Fauns, and Fairies' (written 1691, published 1893), "Their weapons are most what solid earthly Bodies, nothing of Iron, but much of stone, like to yellow soft Flint spa, shaped like a barbed arrow-head, but flung like a Dairt, with great force. These Armes (cut by Airt and Tools it seems beyond humane) have something of the Nature of Thunderbolt subtilty, and mortally wounding the vital Parts without breaking the Skin; of which Wounds I have observed in Beasts, and felt them with my Hands."

Gwyn ap Nudd also provides a connection, being said to be both King of the Welsh Fairies, the Tylwyth Teg, and King of Annwn, the Welsh Otherworld or Underworld. He is said to ride as leader of the Wild Hunt, with his pack of wild hounds the Cwn Annwn. They are said to be white with blood red ears, and howl a wild lamentation, with their howls becoming quieter the nearer they get.

In Dartmoor, these Hounds of Hell are given the name of Wisht Hounds, or a variation of such. According to Traditions, Superstitions & Folklore by Charles Hardwick (1872), a writer in the Quarterly Review of July 1836 wrote, "the wild huntsman still lingers in Devonshire. He says, "the spectre pack which hunts over Dartmoor is called the 'wish hounds', and the black 'master' who follows the chase is no doubt the same who has left his mark of wistman's wood," a neighbouring forest of dwarf oaks."

James Motley in his 'Tales of the Cymry' (1848) states "Certain spots on Dartmoor are more commonly haunted by the wish hounds than others, Several ancient roads are mentioned as their peculiar resorts, as "The Abbot's Way", "The Ridge Road", and on certain nights, of which St John's Eve is alwats one, they are supposed to go in procession through the long deep shady lanes which abound in this district." He describes them as "rough, swarthy, and of huge size, with fiery sparks shooting from their eyes and nostrils." and tells "It is not safe to leave the door of the house ajar, for in this case they have the power of entering, and have been known to devour sleeping children in the absence of the household." "They are guided by the master, a dark gigantic figure, carrying a long hunting pole at his back, and with a horn slung around his neck."

As terrifying as they sound, according to the Devonian Year Book 1910, "The hounds can be kept away by placing a crust of bread beneath the pillow of the sleeping child. Originally, no doubt, the breads was such as had been consecrated for sacramental use, but there is apparently now no such restriction."

Despite all of the terrible stories, this unbaptised soul decided to investigate further and visit some of the sites where the Wisht Hounds are said to most often frequent. First on my list was Wistman's Wood, an ancient copse of dwarf oak trees. Some think the woods to be an ancient Druid grove, and the Buller stone to have been once used by Druids. Others say the woods are the kennel of the Wish Hounds, and that Old Crockern, the spirit of Dartmoor, releases them from their kennels and rides of a skeleton horse in pursuit of lonely travellers. Some sources say that no dog will set foot in the copse, though after witnessing this with my own eyes I can confirm it is not true, though the owner did tell me that the dog tends to get very wishty and wild when walked on the moors.

I have not been able to find any older sources about Wisht Hounds in Wistman's Wood unfortuntunately. Mrs Bray mentions the woods in 'A Description of the Part of Devonshire Bordering on the Tamar and the Tavy' (1836) as being "where the groves of the wise men, or Druids once stood" but does not mention the hounds as far as I could see. The quote from Charles Hardwick's Traditions, Superstitions & Folklore (1872) refering to the 'black master' who left his mark on Wistman's Wood is most curious, and I would love to see a copy of the article from the Quarterly Review of July 1836 of which he is quoting from, but have been unable to locate a copy so far. If anyone can assist I would be most grateful.

On our visit to Wistman's Wood we parked at Two Bridges, and were met with rather foggy misty weather. All week the weather had been rather grumpy so we were well prepared with map and compass and safety items just incase the mists worsened, you can never be too careful. Onwards we walked along the rocky path, and eventually out we came on to the moors. 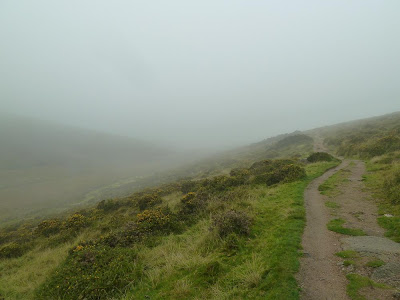 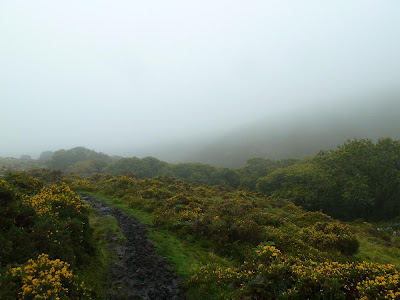 The mists created a haunting eerie atmosphere, and the dark silhouette of the woods looming in the distance added a feeling of foreboding. 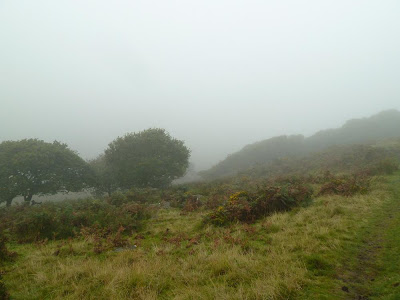 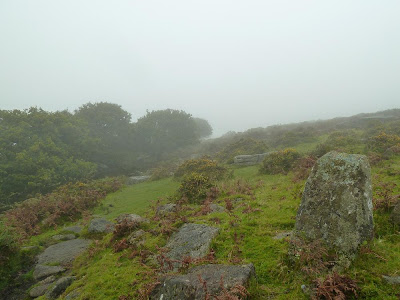 We wandered into the woods, treading carefully as the woods are a protected nature reserve, and were greeted by this ancient looking tree guardian, or perhaps a Tolkienesque Ent. 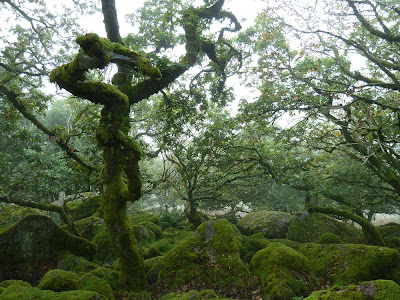 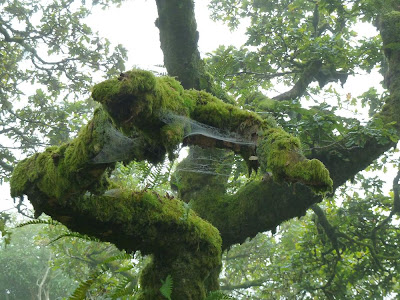 Onwards we delved, shrouded in mists and mysteries. Gnarled and wise old trees surrounding us in every direction, with mossy green boulders offering the most comfy of seats. 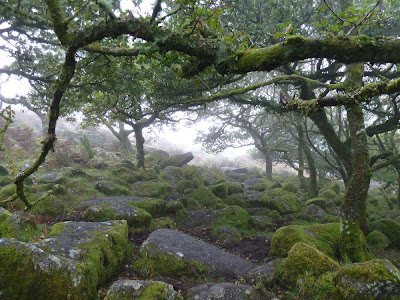 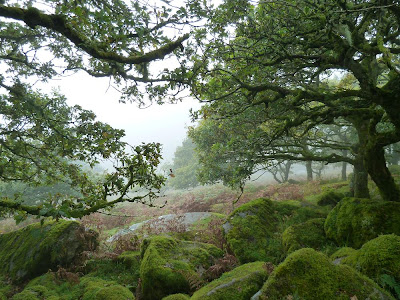 Then we came upon the Druid Stone, or Buller stone. Although the entire area is littered with boulders of all shapes and sizes, this one does stand out among it's brothers and sisters. 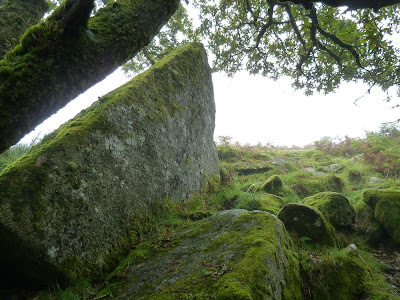 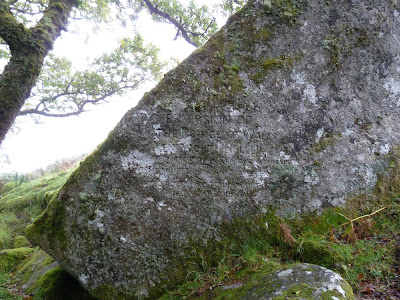 Just as we reached the far end of the woods, the mists began to clear and we were treated to beautiful glossy green views through the entire forest... 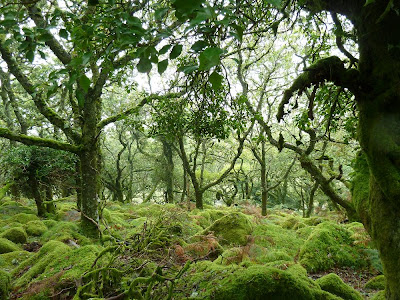 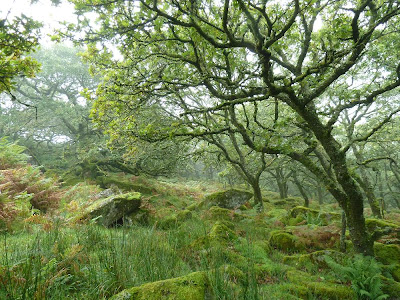 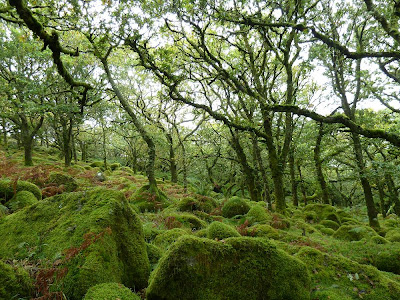 For further information on the legends and history of Wistman's Wood, I recommend the Legendary Dartmoor website.

I don't think I would be able to leave that place of beauty. It's like Avalon with all the mists and green moss. Very otherworldly looking.

Fantastic - A lovely place. Wild dogs of a slightly more solid kind certainly do still inhabit the wild moors - just one valley over from Whistmans wood I was on the far hilside a sheepdog come 'out of nowhere' and charge into a group of sheep. It took one by the neck and chucked her down on the ground. Having a good look around for farmers or other walkers and seeing none I shouted at the dog, but it was too far away to reach. It did look up at us and back off a bit, allowing the sheep to get to its feat. I think the dog may have woried it down again and so we bellowed at it again and it scarpoured off up over the hill. I went to a local house and told the man who lived there and he said he would tell the farmer - they did get stray and 'wild' dogs worrying the sheep there. Also I have heard three reports of good sightings of big cats near us "the size of Alsatians", though none for the past 5 or so years... Loved your post - and Whistmans wood. Black-a-tor copse is also worth a visit - almost has the edge on Whistmans wood I think for wild beauty...

It is such a beautiful place! Next visit i'll definitely take a look at Black-a-tor copse too, I read about it in a walking book, but alas ran out of time on the holiday :( I did wonder around wild dogs on the moor after finding the 2 dead sheep remains on Sheepstor, way one of em had been dragged into a cave did make me wonder if it could have been wild dogs, remains looked very torn apart like more than one creature had been pulling at it. Could have been foxes though! Glad the sheep in your story survived, lucky you were there to interrupt the dog!

Gorgeous photos - thanks for sharing - reminds me of a stretch of the Peak District near Lathkill Dale - a limestone valley covered in fallen rocks trees and moss.

Hi Paul, thanks for leaving a comment! :) England certainly has a lot of beautiful scenic places hidden away!!

Just discovered your blog, and I'll definately be following you from now on. Very nice work and beautiful photos of the Wishtman's wood: I live just a few miles away from there, and I can vouch for the magic of the place. Did you visit nearby Merrivale while you were there? The stone rows bring the landscape to life with the Old Religion.

Hi Damien, you're so lucky to live in such a beautiful area! Unfortunately I didn't get a chance to visit Merrivale, but I just had a look on the English Heritage website and it certainly looks magical! Hoping to go back to Dartmoor one day for some more exploring! One thing that did amuse me while I was there, how the sheep have an amusing habit of looking like standing stones and stone circles on the hills! Sure I read a folk story about a chap selling some stones to a guy who thought they were sheep... I can see why!!

Hi there, thanks for the great article and photos of Wistman's Wood.
If you like 70s style prog rock/folk then you may like to hear this 4-part supernatural song that a friend and I made which tells a dark tale of a traveller's ill fated journey to this incredible Dartmoor wood. Hope you enjoy. Thanks :) Nathan Jon Tillett

Hi Nathan, thanks so much for sharing your song, magical! Hope you'll be writing more folkloric songs in the future :D