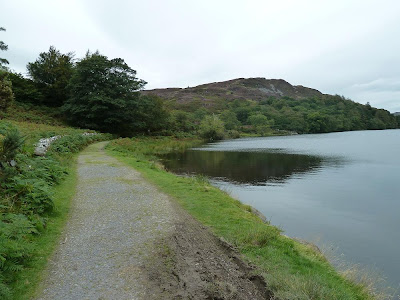 In North Wales, a little north of Dolgellau, is a beautiful Welsh lake named Llyn Cynwch. According to legend there is a beautiful marble palace at the bottom of the lake belonging to the fairies. T.P. Ellis writes in his 'The Story of Two Parishes: Dolgelley and Llanelltyd' (1928):


"The most famous of all were the fairies of Llyn Cynwch, and the beauty of the place is so entrancing that no wonder fairies loved the little dell. At the bottom of the lake is a marble palace, which only one human being has ever been privileged to see. He was a servant of Nannau, in love with the dairy-maid at the farm of Dol-y-clochydd,-isn't that a beautiful name, the Meadow of the Bellringer? - and one dark night, when going to see his lady-love, he fell into the lake, saw all its wondrous glories, and was eventually led by no less a person than the King of the Fairies along a marble passage, at the end of which was a slate slab, which, when lifted, turned out to be the hearth stone of Dol-y-clochydd, by the side of which the lost lover discovered the dairy-maid weeping over him, for he had been absent for months."

Rhys, Celtic Folklore (1901) also names the house as Dol y Clochyd and calls the young man "the sweetheart of one of siwsi's girl's" and tells he lost his way to her from Nannau. When he falls in the lake he finds it clearer the lower he gets until "at least he alighted on a level spot where everybody and everything looked much as he had observed on the dry land. When he reached the bottom of the lake, a short fat old gentleman came to him and asked his business, when he told him how it happened that he had come." He stayed here a month without knowing that he had been there three days, and he was greatly welcomed. The inhabitants of the lake led him out and through the hearthstone, where he met his sweetheart as she was by the fire weeping for him.

The author attributes this story to the first volume of the Taliesin, published at Ruthin in  1859-60, by a writer called Cofiadur. "It was Glasynys, I believe, for the style seems to be his: he pretends to copy from an old manuscript of Hugh Bifan's - both the manuscript and its owner were fictions of Glasynys' as I am told. These jottings contain two or three items about the fairies which seem to be genuine", including the above story.

The story also appears in Volume 16, No. 10 of the Welsh outlook, Oct 1929. The article is also written by T.P. Ellis but contains greater detail than the version in 'The Story of Two Parishes' published in the previous year. The author writes that when the young man sinks down to the bottom of Llyn Cynwch he "found himself in the fairest garden he had ever beheld. All the flowers he knew, and a lot of flowers he didn't know, were blooming together, spring, summer, and autumn flowers, all at the same time. Journeying through the flowers, he alighted on a marble palace, shining white and picked out with the rarest of gems and glittering with gold and with silver. At the palace door he met the King of the Fairies and the King of the Fairies, recognizing him as lover, led him through the marble palace, down corridor after corridor, until, at last, they came to a great white slab, brighter and whiter even than the palace itself. It was the hearthstone of Dol-y-clochydd. The King pushed the stone aside, and, stepping upwards, the lover found himself in the kitchen of the farm, side by side with the maid he had set out to see, and who was weeping because he had not arrived."

We visited Llyn Cynwch whilst in Wales in September (Sorry I'm a little late in typing this up!). We followed the Precipice Walk that takes you alongside the Llyn and includes lovely dramatic views from the side of the hill above the Llyn, details of the walk can be found here. The Llyn is curious and reflective, and surprisingly dark in places. The water levels must have been particularly high as there were trees sat deep in the water in places. Despite many long and lingering glances into the depths of the Llyn, the marble palace stayed hidden on this occasion. 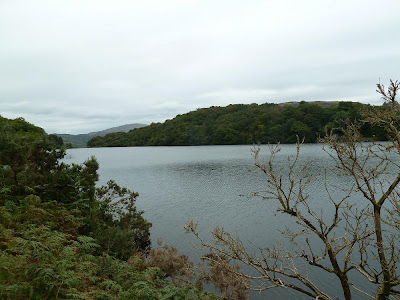 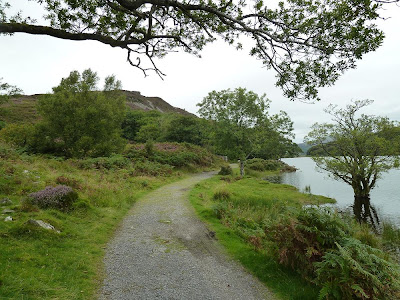 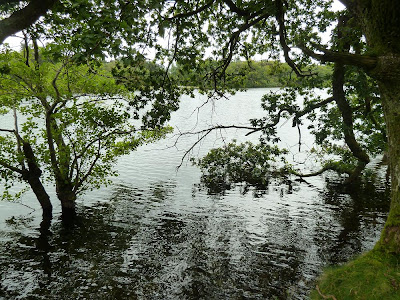 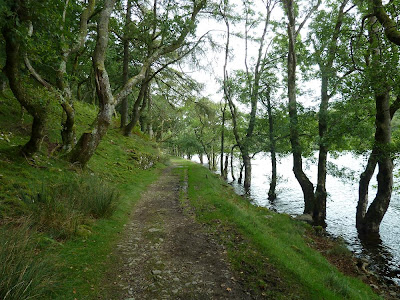 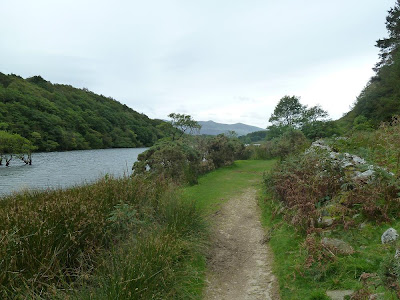 So nice to see you back again! Wonderful variety of places and stories ~ so much it will take me awhile to catch up. Been checking in but had not seen anything new since Sept. So pleased you are still pursuing the faery world.

Hiya! Glad to hear you're still reading, thought everyone might have given up on me updating!! :D Off to the Argyll area next month so will hopefully be doing some more updates again soon!

Great news! Looking forward to any of your updates. I think your blog is the best on the web on the subject and certainly the best treatment of and illustration with your wonderful photos. Will continue to stop in to see your most recent offerings.

Oh wow! What a gorgeous place! It just looks so magical! I can completely believe that theres a fairy palace lurking under that water :)

It is a very beautiful place! I'm a bit of a scaredy when it comes to going in water, but it'd be hard to resist wading in if I caught a glimpse of the palace. Just checked out your blog, your tattoo sounds awesome! Can't wait to see the photos when it's done :D

Thanks. I'll definitely be uploading some as I have it done :)

I'm finding your blog just completely fascinating! I'm so jealous of all the places you've visited! I've always wanted to take a Holiday in Scotland and visit as many places related to fairytale and folklore as possible, so I'm extremely envious of you. Maybe I'll have to go to Wales now instead :)

I going to get into my pyjamas, make a cup of tea and read through all of your blog tonight - so expect lots of comments to be popping up soon :p