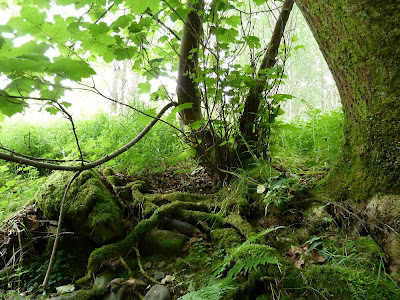 Not far from Melrose is a green mossy woodland that hides a gently flowing stream, dappled with sunlight and sprinkled with ferns and nettles. It's name? The Fairy Dean. Sir Walter Scott writes this of it in The Monastery (1830):


"Another, and even a more familiar refuge of the elfin race, (if tradition is to be trusted,) is the glen of the river, or rather brook, named the Allen, which falls into the Tweed from the northward, about a quarter of a mile above the present bridge. As the streamlet finds its way behind Lord Sommerville's hunting-seat, called the Pavilion, it's valley has been popularly termed the Fairy Dean, or rather the Nameless Dean, because of the supposed ill luck attached by the popular faith of ancient times, to any one who might name or allude to the race, whom our fathers distinguished as the Good Neighbours, and the Highlanders called Daoine Shie, or Men of Peace; rather by way of compliment, than on account of any particular idea of friendship or pacific relation which either Highlander or Borderer entertained towards the irritable beings whom they thus distinguished, or supposed them to bear to humanity.

"In evidence of the actual operations of the fairy people even at this time, little pieces of calcareous matter are found in the glen after a flood, which either the labours of those tiny artists, or the eddies of the brook among the stones, have formed into a fantastic resemblance of cups, saucers, basins, and the like, in which children who gather them pretend to discern fairy utensils."

The Fairy Glen is also mentioned in 'The Home Life of Sir David Brewster' by Mrs Brown (1881) 3rd edition, it states that


"On the banks of the Elwand water, which runs into the Tweed about two miles above Melrose, there is a picturesque glen called the Fairy Dean, which has become a favourite place of resort, from it's association with the incidents in the Monastery by Sir Walter Scott."

"When the Waverley Novels were not acknowledged by their author, facts or incidents to which they referred were always welcome subjects of conversation at Abbotsford ; and on one occasion when I happened to mention that singular stones were found in the Fairy Dean, Sir Walter Scott expressed a desire to see them, and to know how they were formed. I accordingly sent some young persons to search for them in the bed of the rivulet, and I was fortunate in thus obtaining several specimens of great variety, and singular shape, and showing, very clearly, the manner in which they were formed."

Some examples of these fascinating stones are held by National Museums Scotland, and a photo of them can be found here.

After lots of driving around in circles and getting buried under the crisp white sheets of Ordinance Survey maps, we looked for somewhere to park that would hopefully lead us to the Fairy Dean. Perhaps there's an easy way into the glen, but if so, we couldn't find it! We managed to park up on a country lane and after a walk across field edges and wading through nettles, we came to a beautiful little green oasis hidden among the roughly ploughed fields, the Fairy Dean or 'Nameless Dean' to those who speak with caution and hushed tones when speaking of the fae. 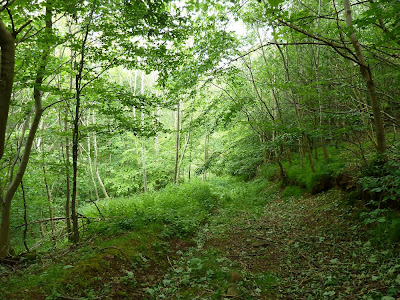 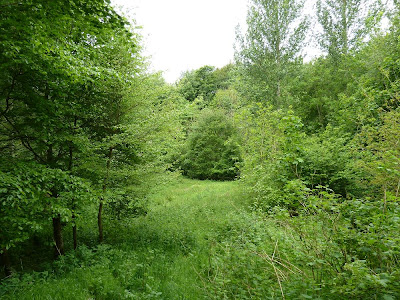 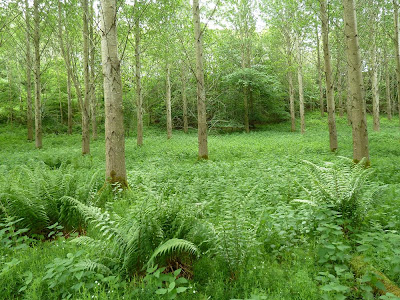 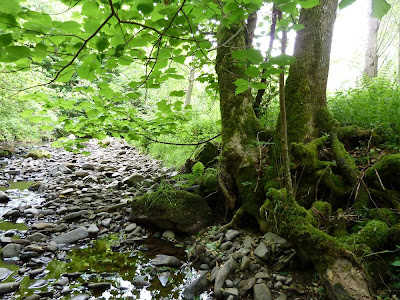 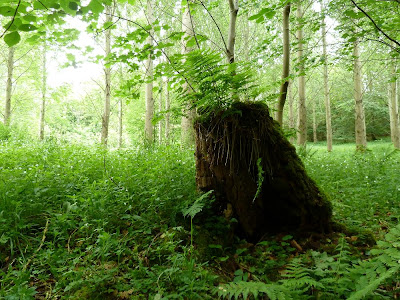 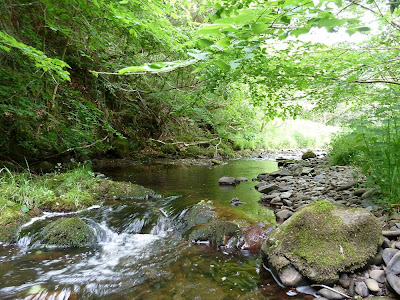 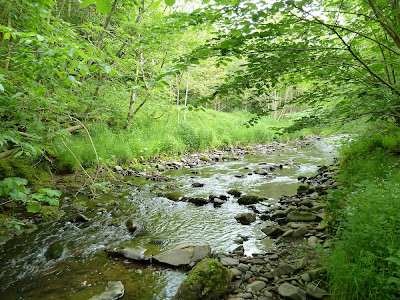 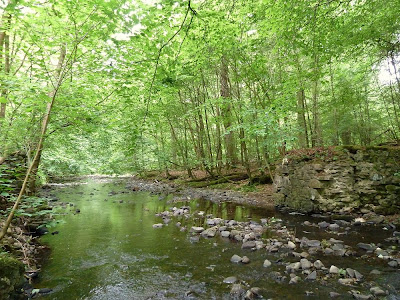 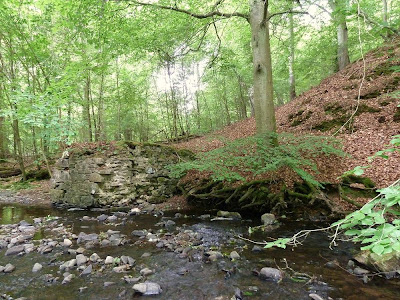 Also worth a mention is the poetically named 'Fairies Bowling Green', a hill not far from the Fairy Dean. In the photo below you can see the hill peaking out over the hedgerow. Unfortunately I haven't managed to find any information on the naming of the hill, but I'm sure there's a very interesting story behind it! 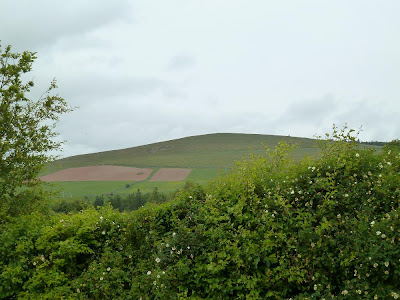 I happened upon a beautiful poem titled 'Beside the Tweed' by Mary Cherry, published in Lyrics of the Open (1914):

Beside the Tweed the Gala mills
To heaven smoke,
Yet, all the way to Eildon Hills
Are fairy-folk.

From Abbotsford to Glendearg Peel
And Lauderdale,
To Leaderfoot from Ashiesteel,
Rings many a tale.

From Huntly-Burn and Rhymer's Glen
To Melrose fair,
The braes are full of fairy-men
And magic there.

Here, every oak a dryad holds,
Each burn a sprite,
And on the hills are fairy-folds
For folk at night.

Among the woods of Avenel
Tradition hides,
And all along the Elwand dell
Romance abides.

Below "The Fairies' Bowling-Green,"
The wee folk play,
And dance along the "Fairy-Dean"
Beside the way.

A mystic music haunts the air
Pan's oaten reed
And memories linger everywhere
Beside the Tweed.

Lovely photos (I want to live there!) and I can see why people would think those stones weren't natural. Very strange-looking things!

I love your posts! Really nice - well done for finding it - the diddy folk must have thought you where all right... Do you think Lord Summerville was much like Lord Summerisle (Wicker Man)?

The stones definitely are strange looking things, I had a good look around in the river to see if I could spot any but alas didn't manage to find any!

Hi Ent, sorry but not familiar with Lord Summerisle, though I do vaguely remember watching the wicker man movie!! Hope I never stumble across a place like that on my travels! :)

A magical place, those faerie stones are amazing & intriguing indeed. How wonderful it would be to actually find one.

Wouldn't it be wonderful to find one! I'd be intrigued to know if any of the locals have found them, maybe they know where abouts in the dean to find them :)

Perhaps it's called the Fairies Bowling Green because fairies used to roll the fairy stones down to the river from there? Just a thought... I visited the area today but didn't get much further than Ellwynd Wood due to the council dump just north of that! What a blot on the landscape!

Hi Aurvandil, that sounds like a very good reason to me for the naming of the Fairies Bowling Green, would at least explain all the strange stones!! :) Just had a look at your blog, and it's a lovely read, look forward to seeing your future entries!

I am fascinated by the place, and have been looking for Elwand water on the map. I haven't located it but hope to visit, because of my family connection. I'd welcome directions
Dave Ellwand
pdellwand@hotmail.com

Hi Dave! Streetmap.co.uk is really handy for finding places online, there's a place marked on the map around there called 'Ellwynd Wood', perhaps there's a family connection there? Think this url should work and the arrow should be pointing at 'Ellwynd Wood', just a little north west of this you can see 'Fairy Dean':

The Ordinance Survey coordinates for the woods are NT526358, so if the url doesn't work just visit that site and put those coordinates in and it should take you straight there. Hope that helps :)

I live in Housebyres just below the Fairies Bowling Green, it is a magical place.

Wonderful descriptions and photos! Archie Fisher has a great song that mentions much of this https://www.youtube.com/watch?v=Q-S26w2unbo

Thanks! I hadn't come across that song before, it's lovely :)

Can anyone tell me anything about the remains of the stone bridges pictured in this blog? I have spotted several of these collapsed bridges with similar architecture along Allan Water at Fairy Dean. I'm very curious!