Today I visited a fairy location I've been wanting to visit for many years, the wonderful Wollaton Park in Nottingham. In 1979 a small group of children were wandering the park early one evening when much to their surprise they were chased by gnomes in motor cars! Certainly not your typical fairy sighting. The children said there were around 30 cars in all, with 2 gnomes in each car. The cars made no motor noise but had a button, bell instead of a horn, "triangularish" lights, and the gnomes leaned to steer them. Another child said they had no steering wheels, just a round thing that turned with a handle on it. The cars could also jump over logs. 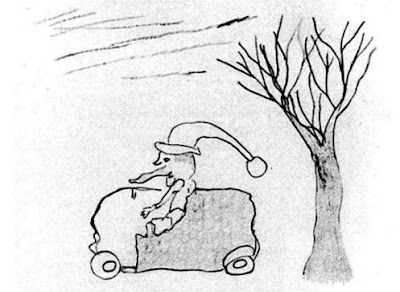 A drawing by one of the children, from John Knifton's Website

The gnomes were described by one child as "about half the size of me and they had long white beards with red at the bottom and they had little white and red cars and they were chasing us". Another child described the beards as long and black. They wore tights instead of trousers and some were torn with yellow patches on, and they wore blue tops and a green cap with a big bobble at the end. The gnomes had old wrinkled faces and were friendly and they laughed joyfully. One child said they didn't talk, another said they shouted at each other but not in a language he understood. One child said he could see them clearly as there was a light hanging in the trees. On this occasion the gnomes chased the children, but one child mentions they had seen the gnomes previously another night but they just ran off rather than chasing the children. One of the children mentions the gnomes chasing them by the gates, and the children ran out the gates but the gnomes didn't follow them out, and the child thought this could be because they don't come out in the light and might have died. 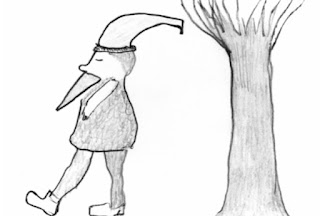 Another drawing by one of the children, from Nottingham post article

In the transcripts the children give the location as "the swamps" and one said "They went back in the bushes – there’s wire round them, a fence, that’s where they get in. We went in the bushes when it was daytime and we couldn’t see nothing, just trees and swamps." Another child mentions the swamp as having a big fence around it, and normally you can't go in there you have to keep out. The third transcript mentions a gnome coming out "the hole where the fence was", and the children saw gnomes coming out the holes in the top of the trees, and the child says "we just went over the fence to look at them and when we went closer to them they went back in the holes." One of the children was said to have fallen into the swamp during the chase, so presumably the children entered the forbidden fenced off area. The children with their headmaster, photo from Nottingham post article

All of the above information came from Simon Young's transcript of the Wollaton Park Gnomes, which can be found here on the Academia website.

The story spread and spread and received media coverage, and although there seems to be no mention of the gnomes in the museum at Wollaton Hall today, the gnomes have not been forgotten by folklorists. Just recently a great article appeared in the Nottingham Post seeking the children who originally saw the gnomes, the article can be found here and is well worth a read and also includes information on other fairy sightings in the park.

An earlier mention of fairy folk in Wollaton Park can be found in Marjorie Johnson's Seeing Fairies, where she writes of an account given to her many years ago by Mrs C George who as long ago as the year 1900 was passing the gates when she saw "little men" dressed like policemen, standing inside the lodge entrance. "They were smiling and looking very happy", and were about 2 to 3 feet tall in height and they hadn't any wings. She also mentions that fairies had been seen dancing around the lake in the park. This book also contains an account by Jean Dixon who became aware of gnomes whilst walking in the park, and described them as eager to show her the scenes and objects that delighted them, as she followed them around the park. Plenty of great articles and blogs have been written about the Wollaton gnomes so I won't go into any greater detail, but what I couldn't find online are any photos of the area where the gnomes were actually seen. As far as I know, the exact location isn't known for sure or at least hasn't been revealed publicly, but I did find a fenced off wooded boggy area that could possibly fit the description. Though considering how many years have passed since the original encounter, fences may have long since been removed or changed. 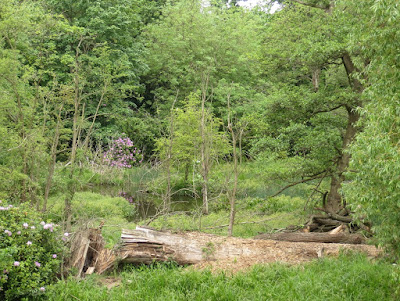 Could this be "the swamp"?

Personally, I'm a bit suspicious of the large area of woodland that has been fenced off and marked with keep out signs, are they secretly running a gnome reserve, thinly disguised as a conservation area? The park does close before dusk every day, just when the gnomes are said to come out to roam the park, so who gnomes! Considering that nearly 500 sandstone caves have been discovered hidden under Nottingham, who's to say what creatures may be living down there? In all seriousness though, if you do visit the park to look for gnomes there are plenty of wonderful public footpaths and walks, please do not venture into the fenced off areas, they are fenced off for a reason and the deer (and gnomes) deserve their peace and privacy. More information on visiting Wollaton Park can be found here, together with the opening hours.

I'll leave you with a few more photos of the beautiful woodlands at Wollaton Park..... 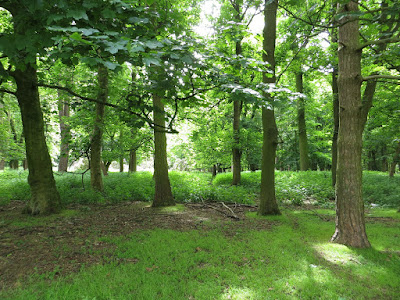 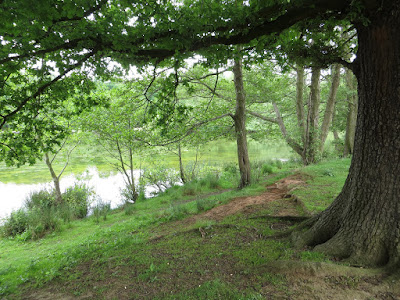 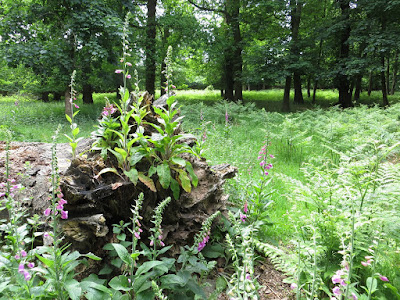 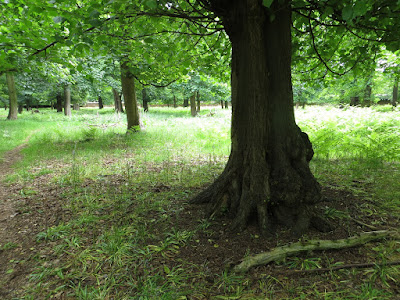 Anyone else see a tree root face here? Also in a swampy area of the park. 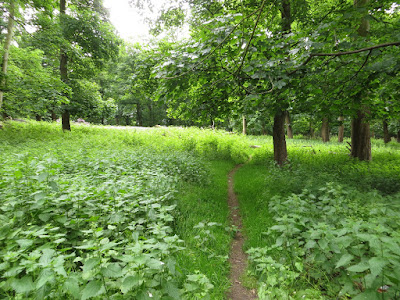 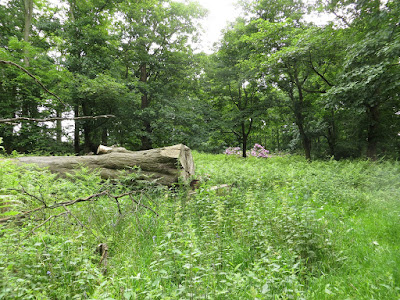 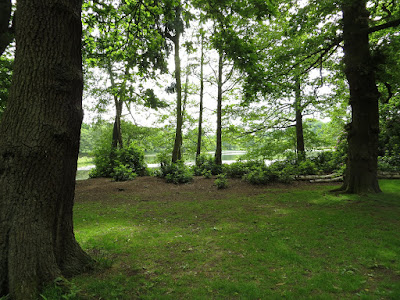 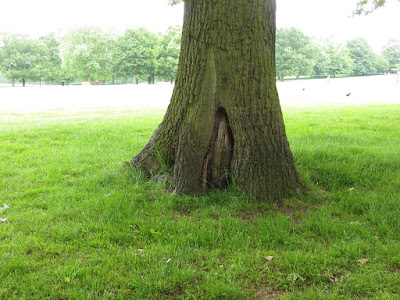 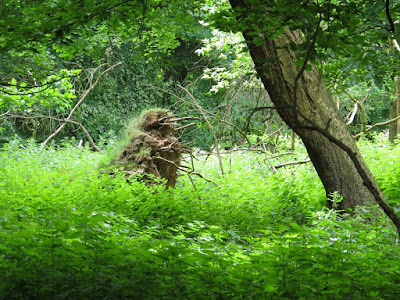 Posted by The Faery Folklorist at 10:55

Hi. Your blog was just introduced to me by a friend in England. The link he put in my email brought me to this page of your blog about The Wollaton Park Gnomes. Doing what I do (see www.landofweefolk.com - please excuse the photo gallery as it is a work in progress as I have hundreds of photos), I wanted to see if you had photographed any "wee folk", so I downloaded each of the photos from Wollaton Park and went through them. I thought you might be interested in the little one in your photo marked "IMG_8946". I wanted to paste the image here for you, but this comment section would not allow it. What was discovered in this photo was a clear image of what I believe is a "toddler elf". I would love to send you the cropped image AND the full image I downloaded from your blog and marked with the little elf in a box as it's always exciting to see what you have photographed, however, there is no email listed for you on your blog. You can email me at chris@landofweefolk.com if you'd like. If you choose to do so, I suggest that you find your IMG_8946 or download it from your article, so that you can see that I did not do anything to the photo. You will find this little toddler elf in your original as well. I hope to hear from you. Blessings.

Hi, I was wondering if you could direct me to the Photo IMG 8946 that you quote in your reply about the Wollaton Park knomes..I would love to see this photo.

It's the one that's titled "the lake", second one after the last paragraph. If you click on the pic, then check the address, the name of the pic will appear in it
Though I personally can't see anything unusual in the picture